Italian budget draft to be submitted to Brussels 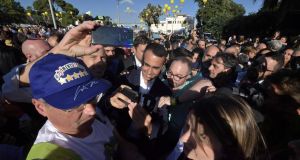 Participants at the 5-Star Movement (M5S) 5-star Italy surround Italian Foreign Minister, Luigi Di Maio (C), during the event to celebrate 10 years since the foundation of the 5-star Movement, in Naples, Italy, 12 October 2019.

Italy’s government approved a draft 2020 budget in the early hours of Wednesday that aims to cut taxes for middle-earners and crack down on tax evaders, while holding the deficit at the same level as this year, government officials said. The package was agreed at a cabinet meeting of the anti-establishment 5-Star Movement and its centre-left coalition partner the Democratic Party.

It will now be sent to Brussels for scrutiny by the European Commission. The budget scraps a hefty increase in sales tax worth €23 billion which had been scheduled to take effect in January, but which the coalition feared would push Italy’s already-stagnant economy into recession.

However, since setting the economic targets that provide the framework for the budget in September, the ruling parties have struggled to agree on many of the measures to adopt. Full details of all the agreed measures were not immediately available, but a final version of the text seen by Reuters ahead of the late night cabinet meeting showed the government planned income tax cuts for middle-earners.

The reduction will cost state coffers some €3 billion in 2020. The financial bill targets the 2020 deficit to remain at 2.2 per cent of gross domestic product for a third consecutive year. Deputy economy minister Laura Castelli, from the 5-Star Movement, said in a statement on Tuesday that the lengthy negotiations with the PD had yielded “an expansionary budget” that will increase benefits for poor families and the disabled. To help finance these measures, the government has put together a raft of measures to curb rampant tax evasion which costs the state some 109 billion euros every year, according to Treasury estimates. The budget must be presented to parliament by October 20th and approved in both houses by the end of this year. It remains to be seen whether it will be rubber-stamped by the European Commission.

The package targets the structural deficit - which strips out the effects of economic growth fluctuations -- to rise by 0.1 per cent of GDP next year, reversing a commitment made in July to reduce it by 0.6 points. The anti-tax-evasion plan, targeted to raise an ambitious 7 billion euros, aims to encourage the use of easily traced credit and debit cards rather than opaque cash transactions. The budget draft seen by Reuters introduces sanctions of up to €2,000 for retailers and service providers that do not accept credit cards. It lowers to €2,000 from 3,000 the threshold above which it is illegal to make cash transactions. The amount is expected to be further pushed down to €1,000 from 2022.

To encourage people to ask retailers for receipts, the budget also launches lotteries in which holders of the winning receipts, identified with a number, get a tax-free cash prize. These “receipt lotteries” have already been adopted in several countries including Portugal, Slovakia and Malta. A new “web-tax” on digital companies aims to raise around €600 million each year, the draft showed. The levy, applied on companies with annual global revenues worth at least 750 million euros and digital services exceeding 5.5 million euros in Italy, obliges them to pay a 3 per cent levy on internet transactions conducted in Italy. - Reuters