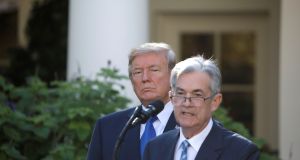 US president Donald Trump with Jerome Powell, chairman of the US Federal Reserve. Photograph: Carlos Barria/Reuters

A widely watched bond market indicator sent its strongest recession warning in more than a decade this week, as the global growth outlook dimmed and questions swirled about the Federal Reserve’s commitment to cut interest rates in light of rising US-China trade tensions.

The yield on three-month US Treasury traded as much as 41.23 basis points above that on the benchmark 10-year government bond on Wednesday – the widest gap since March 2007. Such an inversion of the yield curve – in which short-term yields are higher than longer-term ones – has preceded every recession of the last half century.

The difference narrowed by about 10bp later in the day as US stock prices gained ground and a government bond market rally lost steam, but the persistence of the yield curve inversion underscored the anxieties in global financial markets.

Analysts said fears about global growth were exacerbated by interest rate cuts by New Zealand, India and Thailand, a dismal industrial production report in Germany and the growing likelihood that the UK will leave the EU without a deal in October.

“The next recession couldn’t have been better telegraphed,” said Mark Holman at TwentyFour Asset Management. “There is a trade war between the two global superpowers, with both sides digging in their heels, and the clock is ticking towards a hard Brexit, so it really does make sense to take risk off the table.”

Michael de Pass, the global head of US Treasury trading at Citadel Securities, said the deeper inversion of the yield curve traced back to concerns the Fed is moving too slowly to lower rates.

“The message that the market appears to be sending is that the Fed is behind the curve and is at risk of a policy error,” he said. “It is too early to say whether it actually is behind the curve, but that line of thinking has certainly been a key driver of price action over the last few sessions.”