US wage growth slips below 3% for first time since 2018 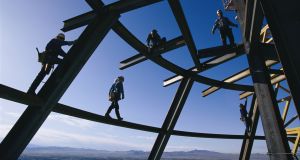 The labour force participation rate, a measure of the proportion of the working-age population that is employed or looking for a job, was unchanged at 63.2 per cent

US wage growth dropped below 3 per cent last month for the first time since July 2018 as the economy added fewer jobs than expected, according to a key report released on Friday.

While job growth slowed significantly from November’s robust gain of 256,000, the employment situation report released on Friday by the US labour department showed the US jobs market remained stable at the end of the year.

In the 12 months through December, wages rose 2.9 per cent after gaining 3.1 per cent in November, marking the first reading below 3 per cent for wage growth since July 2018. Wage growth, particularly for nonsupervisory workers, had been at post-recession highs, a sign of demand for workers.

The labour force participation rate, a measure of the proportion of the working-age population that is employed or looking for a job, was unchanged at 63.2 per cent.

The job gains came from the US services sector, particularly in retail, which added 41,000 jobs, and – as in November – strength in education and health. The leisure and hospitality sector added 40,000 jobs, a continued sign that Americans feel confident enough to eat out.

Manufacturing, a key political indicator for the industrial midwest, lost 12,000 jobs, with losses in both more expensive durable goods, such as washing machines, and nondurable goods. Mining continued its decline, losing 9,000 jobs as low oil prices continued to drive a contraction in US shale fields.

Market reaction to the jobs report was muted. US stock futures were little changed, and Treasury yields extended their declines, with the yield on the 10-year down 2.1 basis points to 1.8371 per cent. The dollar weakened against the yen and euro immediately after the report, but quickly bounced back. – Copyright The Financial Times Limited 2020