US unemployment at 10-year low as growth bounces back 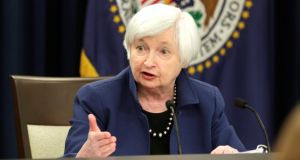 Federal Reserve chair Janet Yellen. Job gains in line with expectations would support the Fed’s contention that the 0.7 per cent annualised growth pace in the first quarter was likely “transitory”.

US job growth likely rebounded in April and wages increased, pointing to a further tightening in labour market conditions that could pave the way for the Federal Reserve to raise interest rates next month.

Nonfarm payrolls probably increased by 185,000 jobs last month, according to a Reuters poll of economists, after a paltry gain of 98,000 in March.

The March gain, the smallest in 10 months, was dismissed as payback after unseasonably mild temperatures in January and February pulled forward hiring in weather-sensitive sectors like construction and leisure and hospitality.

The labour department will release its closely watched employment report later on Friday.

Job gains in line with expectations would support the Fed’s contention that the pedestrian 0.7 per cent annualised economic growth pace in the first quarter was likely “transitory,” and its optimism that economic activity would expand at a “moderate” pace.

“The labour market continues to tighten, we have on average seen inflation rise over this past year,” said Ray Stone, an economist at Stone & McCarthy Research Associates in Princeton, New Jersey. “From the Fed’s perspective, there is probably going to be a policy tightening in June and probably again sometime over the balance of the year.”

The US central bank raised its overnight interest rate by a quarter of a percentage point in March and has forecast two more increases this year.

Average hourly earnings likely rose 0.3 per cent last month, partly because of a calendar quirk. While that would keep the year-on-year increase at 2.7 per cent, there are signs that wage growth is accelerating as labour market slack diminishes.

The economy needs to create 75,000 to 100,000 jobs per month to keep up with growth in the working-age population. Job growth averaged 178,000 per month in the first quarter.

The unemployment rate probably ticked up to 4.6 per cent last month from a near 10-year low of 4.5 per cent in March. With the labour market expected to hit a level consistent with full employment this year, payroll gains could slow as firms struggle to find qualified workers.

“We have seen a steady increase in anecdotal evidence of a mismatch in the labour force,” said David Donabedian, chief investment officer at CIBC Atlantic Trust Private Wealth Management in Baltimore. “There are a number of industries that are having trouble hiring enough qualified personnel and those things will eventually lead to upward wage pressures.”

Retailers including JC Penney, Macy’s and Abercrombie & Fitch have announced thousands of layoffs as they shift toward online sales and scale back on brick-and-mortar operations.

“At this point there just aren’t a lot of excess discouraged workers left and dropout rates of unemployed workers are already low, so there’s not a lot of apparent room left to extend the participation rate rebound,” said Ted Wieseman, an economist at Morgan Stanley in New York. – (Reuters)