Number on Live Register now at lowest since October 2008

Long-term claimants down 19.1% in the year to April, new figures show 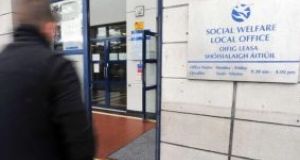 The numbers of people signing on the Live Register is at its lowest since October 2008, with a further 4,600 leaving it last month, new figures from the Central Statistics Office (CSO) show.

The Live Register includes part-time, seasonal and casual workers who are entitled to jobseekers’ benefit or allowance. Separate CSO figures published earlier this week put the State’s jobless rate at 6.2 per cent for April.

The latest figures show there were 58,096 casual and part-time workers on the register in April, equivalent to 22.1 per cent of the total.

During the year the number of people aged under 25 on the register continued to fall as it has in all months since July 2010. In the year to April, the number fell by 7,191 or 19.5 per cent.

Minister for Jobs Mary Mitchell O’Connor welcomed the continuing fall in those on the register, saying she believed the country was heading back towards full employment.

“Our focus remains on continuing to create the right environment for job growth right across the country,” she said.