The Chief Economist of the Central Bank of Ireland, Gabriel Fagan, has said that a hard Brexit could cost Ireland 40,000 jobs and lower the GDP by 3% over the next ten years. Video: Oireachtas TV 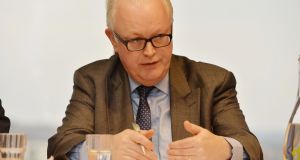 Gabriel Fagan, chief economist of the Central Bank: “Some small to medium enterprises are likely to be among the hardest hit by Brexit.” Photograph: Alan Betson

Under a hard Brexit scenario, Ireland could lose 40,000 jobs after 10 years, according to the chief economist of the Central Bank.

“Our estimates suggest that after 10 years, GDP would be lower by 3 per cent,” said Gabriel Fagan. According to the bank, that estimate is in line with those of the Economic and Social Research Institute and the Department of Finance.

Speaking at the Seanad special select committee on the withdrawal of the United Kingdom from the EU, Mr Fagan said that the bank’s analysis is that the overall economic effects for Ireland in both the short term and longer term will be negative.

“The effects will be much worse if no free trade agreement can be reached. Some small to medium enterprises are likely to be among the hardest hit by Brexit,” Mr Fagan added.

The main concern from the bank is that the UK’s departure will be a hard Brexit, which “may require sudden regulatory and financial adjustments during a period of heightened uncertainty in the financial services sector”.

However, Mr Fagan noted that Brexit will present new opportunities for the Irish economy.

“Most notable in this regard are potentially stronger inward foreign direct investment as a result of both a relocation of existing UK-based FDI to Ireland and new FDI flows locating to Ireland instead of the UK.”

While he suggested that new FDI flows could lead to the creation of jobs in Ireland and add to economic growth, he also acknowledged that challenges will be created by new FDI, including for the property sector.

“The Central Bank has received a large number of Brexit-related authorisation enquiries from across all sectors, including banks,” said Mr Fagan.

He noted that the level of Brexit-related activity is in line with what the bank expected, but, in the coming months, he said that the bank expects to see “a meaningful increase in applications for authorisation or for extension of existing business”.

In an effort to deal with the increased level of activity, the Central Bank has increased, or is in the process of increasing, its authorisation teams across all sectors, added Mr Fagan.

1 ‘My rent here is so low it’s a joke’
2 This charming man: how Paschal Donohoe won the Eurogroup presidency
3 Goodbody’s planned €155m sale to Bank of China falls through
4 ‘Sad day’ for House of Ireland as tourism retailer goes out of business
5 Caveat: The tourism sector deserves to be taken more seriously in this crisis
6 Banks will be judged less on payment breaks and more on next step
7 Tale of two Disneys highlights differences in Covid-19 strategies
8 Pharmaceutical industry signals it won’t extend drugs deal
9 Remote workers double as users prepared to pay more for broadband
10 Two Irish entrepeneurs shortlisted for leading innovators prize
Real news has value SUBSCRIBE