There are wildly varying figures for new house builds. Which one to believe? 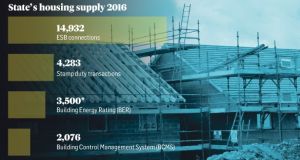 The Government’s housing statistics have become an unlikely faultline in the battle to resolve Ireland’s housing crisis. Critics say the numbers, which are based on electricity connection data, exaggerate the level of supply and give a faulty impression of homebuilding activity.

The Department of Housing admits its figures have been partly distorted by so-called legacy estates, schemes built during the boom that are only coming on stream now. However, it insists the figures are still the most reliable barometer of residential construction.

Other indicators, such as stamp duty transactions, the Building Control Management System (BCMS) and the Building Energy Rating (BER) database, have been used as alternative gauges.

Even though they were not designed to measure housing supply, they suggest the number of new homes being built is much lower than the Government’s estimate.

Why should we care?

Well, if the Department is right and about 15,000 new homes were constructed last year, then the leap to building 25,000 or 30,000 units, the estimated level of demand in the market, could be achieved by the end of next year.

If it is wrong and the true building rate is only a fraction of this, as the other indicators seem to suggest, the crisis is unlikely to be resolved anytime soon and may even worsen in the short term.

Below are four measures which have been used to estimate the State’s housing supply, their strengths and weaknesses, and their relative tallies for 2016.

The Department of Housing says ESB metering data has been used as a proxy to count new homes since the early 1970s, the logic being that developers won’t bring a house to market until it’s connected to the grid.

The problem is that electricity connections can be triggered by work to existing buildings or by formerly vacant units coming back on stream.

The overhang of so-called ghost estates from the boom has resulted in about 6,000 completed but formerly vacant units coming back into stock each year for the last five years. While this is an important supply line, critics claim the department is effectively double-counting by including these as new-build completions.

The department stands over its figures, insisting they are not solely reliant on electricity connections and take into account indirect indicators of new-build activity such as commencement notices and planning permissions.

Nonetheless, it has set up an internal working group to examine better ways of collating the data.

Stamp duty is a lump-sum tax paid on the purchase of land or property above a certain value. Stamp duty transactions for new homes are compiled by the Central Statistics Office (CSO) and are frequently used by analysts to gauge activity in the market.

They are a good indicator of the level of new-scheme homes and apartments being sold, which typically accounts for about 60 per cent of the market.

Many once-off homes, however, are built by owner-occupiers and therefore don’t trigger stamp duty liabilities.

And the overhang of ghost estate units once again complicates matters. Completed but vacant units still in the ownership of the original developer, when sold, qualify as new homes for stamp duty purposes, effectively flattering new-build output numbers.

The Building Control Management System (BCMS) was established in 2014 as part of an amendment to the building control regulations, ostensibly to replace the original paper-based system with an electronic database of building activity.

It is a legal requirement for all construction to be recorded on the BCMS register, which is operated by the Local Government Management Agency.

The register records all commencements but not all completions. In 2015, an opt-out was introduced for one-off homes and large residential extensions. Nonetheless, opt-out projects, estimated at about 40 per cent of the market, are still recorded as commencements.

Despite its potential, the department claims the BCMS was never meant as a measure of new-build activity and notes that certain schemes commenced prior to 2014 may not be captured on the database.

For all its reserve, however, the department still uses commencement numbers taken from the BCMS in its Rebuilding Ireland progress reports.

Since 2013, it has been a legal requirement for a Building Energy Rating (BER) to be recorded on the Sustainable Energy Authority of Ireland (SEAI) register prior to the occupation of every new-estate house, apartment and one-off home.

Similar to the energy label for a household electrical appliance such as your fridge, a BER calculates the energy efficiency for a particular dwelling, including its hot water heating, ventilation and lighting, effectively indicating the energy performance of a home. The SEAI register records all new homes by address and year of construction.

While there is high compliance in estate houses and apartments as BERs are required for sale or rent, there is an issue regarding non-compliance for one-off houses as there is little enforcement.

The BER numbers for the past three years equate to around 25 per cent of the department’s official new-build figures.