US to delay some tariffs on Chinese goods

Levies on some laptops, toys and clothing will start in December, not September 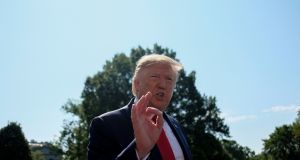 The Trump administration said it would delay imposing a 10 per cent tariff on a series of consumer goods imported from China - including laptops and cell phones - until December, in a bid to ease fears about the trade war’s impact on markets and the economy.

The reprieve from Washington, which triggered a relief rally in US equity markets, was announced after Liu He, China’s vice premier, spoke with Robert Lighthizer, US trade representative, and Steven Mnuchin, the US Treasury secretary, by phone on Tuesday and agreed to have another conversation in two weeks.

Earlier this month, tensions flared up again between Washington and Beijing as Donald Trump threatened to impose 10 per cent tariffs on $300 billion (€268 billion) of new goods beginning on September 1st, on top of the 25 per cent levy already in place on $250 billion of Chinese imports. The US also labelled China a currency manipulator, further inflaming the situation.

The sharp escalation triggered several sessions of deep market turmoil, with investors dumping equities and racing into safer government debt as they worried about the impact on the US and global economy.

But after news of the tariff reprieve and the high-level conversations between Washington and Beijing, the mood in financial markets turned more positive. US stocks climbed 1.6 per cent by mid-morning trading in New York, led by the information technology sector, which gained 2.2 per cent, and consumer stocks, which surged 1.8 per cent.

“Stocks were oversold so the reaction to the tariff delay makes sense,” said Michael Kagan, portfolio manager with ClearBridge Investments. “But the more tariffs are put on, the more risk to the global economy - companies don’t know where to invest because they don’t know what the tariffs will be.”

Brent crude, the international oil benchmark, rallied more than 3.5 per cent on the news to $60.48 a barrel. Oil market watchers have been concerned about the impact of the US-China trade spat on global oil demand.

The threat of tariffs on the new batch of goods had threatened to cast a cloud over the holiday shopping season in the US, given that many of the targeted products are directly linked to consumers. Economists, including Goldman Sachs, have been downgrading their forecasts for US growth this year due to the intensifying trade war, as hopes fade for a deal between Mr Trump and Xi Jinping, the Chinese president, to end the economic hostility.

A new survey by the Pew Research Center in Washington released on Tuesday also showed that American views of China have turned increasingly negative over the past year in the midst of the trade war, which could further entrench the Trump administration.

The delay of tariffs until December 15 does show, however, that US officials are worried about the fallout from the China trade war. The exemptions will only apply to some goods, which Mr Lighthizer’s office specified to include “cell phones, laptop computers, video game consoles, certain toys, computer monitors and certain items of footwear and clothing”. They were being made for reasons of “health, safety and national security”, the USTR said.

The move from the White House gave an immediate boost to US retailers, which have been grappling with whether to raise consumer prices or take a hit to profit margins in response to the levies. Executives had been facing uncomfortable questions from Wall Street about the impact of tariffs during retail earnings season, which gets into full swing this week with results due from Macy’s and Walmart.

“Clothing is important because it hits the average American, no matter the level of income,” said JJ Kinahan, chief market strategist for TD Ameritrade. “If you delay the tariffs on toys and clothing to mid-December that means people will be able to do most of their holiday shopping.”

Retail shares, which had been hard hit in a sell-off two weeks ago after Mr Trump unveiled his latest tariff threat, bounced back on Tuesday. Abercrombie & Fitch rallied 9 per cent, Best Buy was up 8 per cent and Gap gained 7 per cent.

The delay was a “positive” for retailers, said Craig Johnson, president of the consultancy Customer Growth Partners, although he added: “Most astute companies have taken steps to mitigate the tariffs. The market was overreacting to the threat over the last couple of weeks. Now they’ve overreacted with the pendulum swinging the other way.”

While retailers welcomed the reprieve, they remained deeply concerned about the impact of the trade war.

“It will mitigate some pain for consumers through the holiday season,” said Hun Quach, vice-president of international trade at the Retail Industry Leaders Association. However, he added, the decision “does not eliminate the threat and uncertainty the trade war has created for the American economy. We urge the administration to use this time to reach a trade resolution with China”. – Copyright The Financial Times Limited 2019