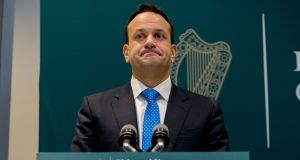 Taoiseach Leo Varadkar during a media update following a meeting of the Cabinet Subcommittee on Covid-19 at Government Buildings on Monday. Photo:Gareth Chaney/Collins

The coronavirus crisis is likely to wipe out the expected surplus in the public finances this year, as the Government pushes up spending to deal with the consequences. It will also have a major impact on growth this year as demand and confidence are hit and companies are disrupted.

A budget surplus of revenue over spending of about €2.5 billion had been pencilled in for 2020. Now higher spending of up to €3 billion – together with the potentially serious impact on tax revenues of lower growth – will push the budget back into deficit.

Goodbody stockbrokers points out the amount committed by the Government here amounted to €630 per head, compared to €148 per person in Germany, €124 in Italy and just €21 in the US

Beyond that the picture is not clear. However, the spread of the virus and fears for global growth – as reflected in financial markets – may require a complete redrawing of the forecasts for the public finances over the next few years. This will have significant implications for talks on the formation of the new government. The big unknown is how long the crisis will last for – and the resulting uncertainty is itself damaging.

Budget 2020, presented last October, was originally drawn up on the basis of a hard Brexit and a deficit for the year was pencilled in. When a Brexit deal was done, the budget figures were recalculated, leading to estimates of a budget surplus of 0.7 per cent of GDP for this year.

Now the impact of the virus has created another kind of economic shock and the public finances will most likely be back in deficit. Most of the €3 billion cost of the package announced on Monday is likely to be met by running down the expected budget surplus, which will be smaller anyway as growth will be hit. Cash is also available in the so-called “rainy day fund” and a payment is expected from Nama later this year – and these are other possible sources of cash, as Taoiseach Leo Varadkar said. So is borrowing on the markets. Any restrictions on spending and debt under EU rules, are expected to be eased in response to the crisis, though we don’t know how exactly this will be managed yet.

As well as meeting key requirements in the health services and helping companies and individuals affected, higher government spending will provide some support for the economy when spending and demand is likely to fall elsewhere. Goodbody stockbrokers pointed out yesterday that the amount committed by the Government here amounted to €630 per head.. “This compares to €148 per person in Germany, €124 in Italy and just €21 in the US,” according to Goodbody economist Dermot O’Leary. He pointed out that as a small, open, economy global demand was vital for Ireland and so measures taken in big economies to support demand will be important for Ireland.

More spending – a lot more – may yet be needed here if the crisis deepens, and as well as a serious public health impact, prolonged major disruption will cost the economy. Senior government ministers have been warning about the risk of a deteriorating situation in the last couple of days. On Tuesday Minister for Finance Paschal Donohoe referred to the risk of “even more challenging circumstances” ahead. As part of this, the outlook for the economy and the public finances faces very significant uncertainty. Measures taken for public health reasons – like cancelling the St Patrick’s day parade – carry their own short-term economic cost and sectors like tourism, travel and hospitality are already looking for government support to help tide them over.

The depth and length of the coronavirus crisis are vital factors. If the worst passes in a few months, growth could start to recover. However, with infection spreading and risks of subsequent waves before a vaccine appears, the threat to the economic outlook and the public finances is growing by the day. The backdrop for the talks on the formation of a new government has just changed significantly. It will be very difficult to come up with a new set of forecasts on which to base the talks, given the uncertainties caused by the virus – not to mention the risks from Brexit. Nonetheless senior officials will have to do this, albeit that significant caveats will be attached.