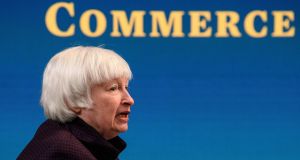 US Treasury secretary Janet Yellen has told G20 finance ministers that Washington will drop a contentious part of its proposal for reform of global digital taxation rules which had been the main stumbling block to an agreement.

The move could unlock long-stalled multilateral negotiations at the OECD, which struggled to make progress after the Trump administration first insisted on the “safe harbour” measure in late 2019.

The provision would have allowed technology companies to abide by any agreement on a voluntary basis.

On Friday, Ms Yellen said at a meeting of G20 finance ministers that the US “is no longer advocating for safe harbour implementation”, a US Treasury official told the Financial Times.

The US “will engage robustly to address both pillars of the OECD project, the tax challenges of digitisation and a robust global minimum tax”, the official said.

Another official close to the international tax talks said the US “wants a deal on both pillars [of the proposals] by July ... the coming few weeks will be critical but the dynamic has never been that positive”. – Copyright The Financial Times Limited 2021