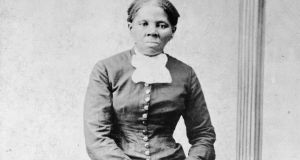 A US Library of Congress image of Harriet Tubman, shown between 1860 and 1875.

Move over, Andrew Jackson. Abolitionist and women’s rights crusader Harriet Tubman will replace the former US president on the front of the new $20 bill, becoming the first African American to be appear on US currency, US treasury secretary Jack Lew announced late on Wednesday.

But the US did not throw away its shot to keep founding father Alexander Hamilton, the nation’s first secretary of the treasury, on the $10 bill. Mr Lew said president Hamilton, who was originally considered for replacement with a female figure, will remain on the front of the redesigned $10 bill after months of backlash led by rabid fans of the Pulitzer Prize-winning hip-hop musical Hamilton.

“There’s no way you can replace Alexander Hamilton right now,’’ said actor Aldis Hodge, who stars in Underground, a television show about the Underground Railroad. “What the Treasury did is show you can do both: You can keep Hamilton on the 10 and put women on dollars where men have maintained space for so long.’’

The back of the new $10 note will feature female activists who fought for women’s rights and suffrage such as Susan B Anthony, Sojourner Truth and Elizabeth Cady Stanton, and the back of a newly designed $5 bill will depict the Civil Rights movement in moments from the Lincoln Memorial that included Eleanor Roosevelt, African American opera singer Marian Anderson, and Martin Luther King Jr.

“It’s quite a great day for women and young people and everyone ... that we can see currency that looks a little more like our country does,” said Barbara Ortiz Howard, founder of grassroots organisation Women on 20s. “I never anticipated this movement having so much life or being able to bring so many people together.”

The announcement Wednesday was met with glee from politicians, activists, artists and Hamilton fans who shared their reactions on social media.

Emily Nahmanson, the founder of Hamiltunes SF, an event at which participants sing along to songs from the musical, said the musical has somehow transferred fans’ affections from the play onto the founding father himself.

She said it’s “fascinating’’ to see how the musical is affecting American culture as a whole while applauding Ms Tubman’s placement as the new face of the $20 bill.

Putting a woman on the $20 bill is a greater victory than it would have been on the $10 bill, Ms Howard said, because the note is more widely circulated and has a greater significance. “One of the reason we were so keen on the 20 is because it’s in circulation four times as much as any other bill, it comes out of our ATMs and it’s used internationally,’’ Ms Howard said.

“This is our way to reach more people than ever before and show them that we stand for freedom.’’

Proponents also applauded the federal government’s decision to replace Mr Jackson, a slave trader who opposed paper money and led the deadly removal of several Native American Indian tribes from their homelands in the southern United States, with a freed slave who dedicated her life to helping others find freedom.

Ms Tubman, best known for her efforts leading dozens of others to freedom along a secret path of safe houses known as the Underground Railroad, is the second woman to appear on the front of US paper money. The likeness of Martha Washington, wife of first president and founding father George Washington, briefly adorned a $1 bill issued in 1886 that was discontinued by the turn of the century.

Mr Lew said Tubman, who also served as a Union army spy during the Civil War and spoke out for women’s right to vote, is someone who “reflects both American values and American democracy, but also the power of an individual to make a difference in our democracy.’’