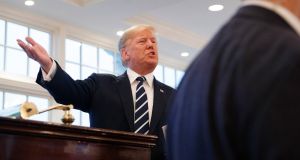 President Donald Trump: “As steward of the global financial system and the world’s largest economy, the US had powerful carrots and sticks. Not anymore,” says Alan McQuaid. Photograph: Tom Brenner/New York Times

The protectionist trade policies being pursued by US president Donald Trump now rank as a bigger threat to Ireland than Brexit, according to Merrion economist Alan McQuaid.

Mr Trump’s imposition of tariffs on EU, Chinese and most recently Turkish imports has cast a shadow over global trading patterns and precipitated a financial crisis in Turkey.

The recent run on the Turkish lira is already undermining confidence in global financial markets and causing asset prices to fall, especially in emerging markets and Europe.

“As one of the most open economies in the world, Ireland is highly exposed to negative trade developments,” Mr McQuaid said.

“While external demand growth seems set to remain robust in the near term, the implementation of higher trade tariffs and the possibility of more protectionist measures represent a key risk to the overall prospects for the Irish export sector going forward, and in the short term are probably a bigger threat than Brexit,” he said.

Mr McQuaid also speculated that the EU and the UK were likely to come up with some sort of deal that would extend beyond next year’s Brexit deadline as it was in both their interests.

World trade volume growth peaked in January at almost 5.7 per cent year-on-year but has nearly halved to less than 3 per cent since then, according to the Netherlands Bureau for Economic Policy Analysis. The new export orders component of JP Morgan’s global purchasing managers’ index also peaked in January, showing the fastest increase for seven years, but has since fallen every month and showed only marginal growth in July.

“Sometimes a crisis can concentrate minds. The sharp decline in the Turkish lira is a strong warning. More currency crises are very likely,” Mr McQuaid said.

“But this is what happens in a global economy without a global authority to guide it,” he said.

“The IMF has lost its power and the old G7 bloc is creaking: the US is led by Trump (America comes first policy), UK is in a mess with the whole Brexit issue, Italy has been taken over by an anti-establishment government, with League leader Matteo Salvini regarded as the nearest thing to Mussolini you can get, and Angela Merkel’s – the voice of reason during Europe’s financial crisis – days as German chancellor are numbered,” Mr McQuaid said.

“As steward of the global financial system and the world’s largest economy, the US had powerful carrots and sticks. Not anymore,” he said.

In the latest tit-for-tat measure, Turkey said it was increasing tariffs on imports of some US products, escalating its brewing trade war with the US. The Turkish government said it will impose extra tariffs on imports of products including rice, vehicles, alcohol, coal and cosmetics. Tariffs on American cars were doubled to 120 per cent, while tariffs on alcoholic drinks soared to 140 per cent. The tariffs come a day after President Recep Tayyip Erdogan said Turkey would boycott US electronic goods, singling out iPhones. He suggested Turks would buy locally made or Korean devices instead.