Will an Irish person finally get a big ECB job?

Sharon Donnery is in the running for head of banking supervision, but she has competitors 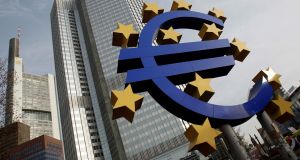 The leadership of the Single Supervisory Mechanism will change on January 1st. Photograph: Reuters

The European Central Bank’s next big appointment will cast a shadow that’s long enough to influence who succeeds Mario Draghi as president.

Applications to follow France’s Daniele Nouy as head of banking supervision are due to close this month. The position is the most powerful for which ECB policy makers get to name a candidate – other top jobs are the gift of governments – and the timing makes it an unusually politically loaded decision.

Whichever country takes over leadership of the Single Supervisory Mechanism on January 1st is probably out of the running for the ECB presidency when Draghi leaves 10 months later. Politicians are unlikely to give up their preference for sharing key posts among member states, and those positions are plum prizes.

“The chance of people from the same country being named to the head of supervision and ECB president is very slim,” Isabel Schnabel, professor of financial economics at the University of Bonn and one of German chancellor Angela Merkel’s economic advisers, said in a phone interview. “The supervision nomination has an impact on the pick for the presidency.”

A committee will draw up a shortlist to send to governments and the European Parliament after applications close on August 24th. The ECB’s Governing Council will then nominate one person by secret ballot, who will be vetted by MEPs and – assuming no complications – signed off by governments. The term is for five years and non-renewable.

The job ad states that professional skills and gender diversity will feature in the decision, and the ECB declined to comment further on the process. Still, many politicians will focus on one key attribute: nationality. Here are some of the countries in the frame.

Sharon Donnery, deputy governor at the Central Bank, is frequently mentioned as a candidate. She’s interested, according to a euro-area official familiar with the matter, and already leads the ECB’s taskforce on bad loans. Her candidacy would also address the pressure for better gender diversity. The Central Bank declined to comment.

The complication is that her boss, governor Philip Lane, is a contender to join the ECB’s board when chief economist Peter Praet steps down in May. Giving two senior posts to a small country such as the Republic might be a hard sell. One scenario could be that Donnery gets the SSM and Lane, still only 48, tries for the board or even the presidency in several years time.

Sabine Lautenschlaeger would be the continuity choice – she’s Nouy’s deputy and her own term ends in February – but selecting her would likely bury the presidential chances of Bundesbank president Jens Weidmann, the current front-runner.

It is unlikely governments would allow Germans to lead both monetary policy and bank supervision, according to one source, a euro-area official. The country already heads the European Investment Bank, European Stability Mechanism and Single Resolution Board.

Europe’s largest economy has never held the presidency, and Weidmann has signalled he’s willing. He has also opposed many of the ECB’s stimulus measures though, and some officials are concerned he would try to reverse them too quickly. Governing Council members might favour a German for the SSM precisely because that would block him.

Lautenschlaeger has played down the prospect of taking Nouy’s job, saying this month that a fresh perspective in bank supervision is important. She also sits on the ECB’s Executive Board and expects to stay there with “new responsibilities,” though precedent means she’d have to quit if Weidmann becomes president – countries don’t have more than one board member.

France is unlikely to get the SSM again after Nouy, which opens the possibility of a push for the presidency despite the country previously having held the post with Jean-Claude Trichet. Bank of France governor Francois Villeroy de Galhau is considered in contention, and Benoit Coeure might even step up from his Executive Board position if that’s consistent with EU rules – such a move has never been done before.

Pentti Hakkarainen holds one of the four SSM board seats that the ECB allocates directly, making him another continuity candidate. Like Germany though, much depends on whether the country has a bigger prize in its sights. Former Bank of Finland governor Erkki Liikanen has said he’d be willing to do his “duty” if asked to be president, and his successor Olli Rehn is another potential choice.

Draghi’s stint as ECB president means his homeland is out of the running this time around, and that could bolster Italy’s chance of getting the SSM. Local media have suggested the country wants the post to compensate for Draghi’s departure and the end of Antonio Tajani’s term as European Parliament speaker after elections in May 2019.

Ignazio Angeloni, another ECB appointee to the SSM board, outlined his “strategic directions” for the operation in a speech in May in a sign that he may throw his hat in the ring. European Banking Authority chairman Andrea Enria would also be well qualified.

While some Governing Council members may object to putting an Italian in charge of reducing Europe’s non-performing loans – one of the SSM’s top priorities – given that Italy has the biggest pile of bad debt, others might argue that experience is useful.

Europe has a pool of current and former bank supervisors, and those from countries with little prospect of the presidency might consider going for the SSM. Eastern Europe has never held a senior post – though money-laundering scandals in Latvia and Estonia will do little to bolster their chances.

The bigger picture is that nations will take into account other ECB board positions, as well as the suite of European posts that will be up for grabs next year.

“The ECB head is one of the most important jobs in Europe, so you’re always going to have a chess game going on behind the scenes,” Andreas Freytag, chair for economic policy at the Friedrich-Schiller University of Jena, said in a phone interview. “You’d hope that the best candidate would get the job, regardless of their nationality, but that’s not necessarily how Europe ticks.” – Bloomberg