Latest analysis highlights the huge cost for Ireland of a disorderly, no-deal Brexit

Britain risks suffering an even bigger hit to its economy than during the global financial crisis 10 years ago if it leaves the European Union in a worst-case Brexit scenario according to the Bank of England. Video: Bank of England 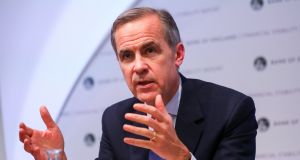 The economic crisis that could be created by a no-deal Brexit has been brutally outlined by the Bank of England in its latest analysis, indicating a sudden crash that would inevitably hit Ireland as well as the UK. The most notable aspect of the bank’s latest analysis is its estimate that a worst-case scenario could see sterling collapse by as much as 25 per cent. While exactly how the euro would react is unclear, this could see sterling fall to 110p, causing devastation for many Irish exporters and big job losses here.

A variety of forecasts in the Republic and the UK have looked at the impact of a so-called hard Brexit involving new barriers to trade. For Ireland, it has been estimated that a hard-Brexit would cost between 4.5 and 7 per cent of GDP, but over a prolonged period of years. What is new about the Bank of England estimate is how quickly it suggests that the economic cost could be paid in a worst-case scenario under which the UK crashes out next March with no withdrawal agreement signed,with GDP in the UK hit by 8 per cent in 2019 and an immediate collapse in sterling. This would mean huge problems for Ireland.

The Bank of England is at pains to say that this is not a forecast of what a no-deal Brexit would mean – it is, however, what it sees as a reasonable estimate of a worst-case scenario, undertaken to judge how UK banks would respond. And it is not pretty. Its worst-case scenario assumes immediate trade barriers between the EU and UK and a breakdown in the ability of UK ports and customs to deal with the sudden changes, leading to something akin to what was seen at the start of the financial crisis.

If the UK faces the cost of Brexit up-front like this, then so will the Republic. Previous estimates were that, at worst, Brexit might knock one percentage point a year off our growth rate for a period of about five to seven years and cost 40,000 jobs. But these forecasts were generally based on an exit involving a transition period of two years. If the pain all comes immediately via a no-deal Brexit next March, then the Irish economy will face a very difficult 2019, with huge implications for employment, growth and the public finances.

The Bank of England study will inevitably increase the pressure on the Irish Government to outline how it would deal with a no-deal scenario. A collapse in the value of sterling would lead to pressure to introduce measures to support exposed companies and save jobs in exposed sectors. The likely hit to Irish growth, while impossible to estimate from the UK figures exactly, would be very substantial, if the outcome is anywhere near the worst-case scenario sketched out by the Bank of England.

Forecasting the economic outcome of Brexit is a near-impossibility given the huge uncertainty of what will happen. However the Bank of England has highlighted one key issue – that the price could be paid very quickly in the worst-case scenario. And, right now, the worst case remains possible.