US corporations could be saying goodbye to Ireland 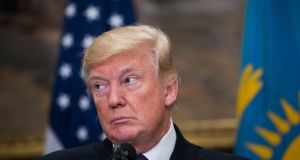 President Donald Trump’s tax reforms are a threat to countries such as Ireland.

Farewell, Ireland: it looks like corporate America will finally bring that cash home.

For years, the likes of Apple and Microsoft have stashed billions of dollars offshore to slash their US tax bills. Now, the tax-code rewrite could throw that into reverse. The implications for the financial markets are huge. The great on-shoring could prompt multinationals -- which have parked much of their overseas profits in Treasuries and US investment-grade corporate debt -– to lighten up on bonds and use the money to goose their stock prices. Think buybacks and dividends.

It’s hard to say how much money the companies might repatriate, but the size of their overseas stash is staggering. An estimated $3.1 trillion (€2.54 trillion) of corporate cash is now held offshore.

Led by the tech giants, a handful of the biggest companies sit on over a half-trillion dollars in US securities. In other words, they dwarf most mutual funds and hedge funds. “There is going to be a significant unloading,” particularly of Treasuries, said Reuven Avi-Yonah, a professor who specialises in corporate and international taxation at the University of Michigan Law School.

“The general consensus is that the best use of the funds is to distribute it out to shareholders.”

That conclusion runs counter to the long-held promises of the Trump administration and Republican lawmakers, who repeatedly suggested their tax rewrite would encourage US companies to bring the money home to hire workers and invest in their businesses.

The $14.5 trillion Treasury market, of course, can absorb the selling pressure of even the largest corporate holders. There’s little to suggest multinationals will immediately liquidate their investments. Many analysts say companies, rather than selling, could just let their holdings gradually mature.

Yet even at the margin, a drop-off in demand could add to the government’s burgeoning funding costs. Not only are interest rates on the rise, but the most sweeping tax cuts in a generation, which could end up mostly benefiting shareholders, risk leaving the government with trillion-dollar shortfalls for years to come – an expense that taxpayers would ultimately have to bear. And since Treasury yields are the global lending benchmark, any upswing could also ripple through the real economy in the form of higher rates on everything from credit cards to mortgages.

Since September, 10-year yields have climbed over a half-percentage point, hitting a high of 2.595 percent this month.

While multinationals may be less inclined to sell their corporate bonds, at least initially, the impact could be more acute, analysts say. In recent years, firms such as Apple and Oracle have become some of the top buyers of company debt. Apple alone holds over $150 billion in the bonds, exceeding even the world’s biggest debt funds.

The market itself is also less liquid, which means it takes far less to move the needle. Big corporations could dispose of a “few hundred billion” dollars of their total debt investments, said Aaron Kohli, strategist at BMO Capital Markets. Repatriation has come back into focus ever since President Donald Trump signed the tax overhaul into law in December.

Besides reducing taxes across the board, it did away with a decades-old provision that allowed companies to put off paying taxes on foreign profits until they brought the money home.

Of course, it’s important to understand that for most multinationals, offshore cash is really only “offshore” for accounting purposes. Under the old tax system, earnings attributed to foreign subsidiaries, often based in jurisdictions with low taxes or lax regulations like Ireland or Luxembourg, could be repatriated and remain earmarked as “held overseas” – so long as it was stashed in US securities.

Apple, for example, manages its hoard from Reno, Nevada, where its internal investment firm, Braeburn Capital, is located. “The term overseas cash can be a bit of a misnomer, as it doesn’t have to be overseas and in fact a lot of it isn’t,” said Michael Cahill, a strategist at Goldman Sachs . That should limit any appreciation in the dollar related to repatriation over the longer term.

Now, multinationals have eight years to pay a one-time tax on the accumulated income. Foreign earnings held as cash or equivalents – previously taxed at a 35 per cent rate when repatriated – would be subject to a 15.5 per cent rate. Non-liquid assets would be taxed at 8 per cent.

“Most multinationals will no longer tie themselves up in knots with their Treasury function with a big pile of cash that’s trapped in a foreign corporation and invested in securities and that they can’t use,” said Richard Harvey, a former top tax official at the Internal Revenue Service and Treasury Department, who now teaches tax law at Villanova University. Goldman’s Michael Cahill predicts corporate cash will be a hot topic on conference calls as earnings season heats up. Any repatriation will likely come from money already parked in US securities.

“Repatriation headlines from the earning calls could cause investors to react,” Mr Cahill said. His analysis showed that eight firms – led by Apple, Microsoft and Google’s parent Alphabet – accounted for almost two-thirds of the overseas cash held by SandP 500 companies.

According to the most recent filings, they had over $500 billion in US government bonds and corporate debt, data show. (The top companies generally hold securities due in under five years, according to Bank of America ’s Hans Mikkelsen.)

Apple, which has become something of a poster child for multinationals accused of sheltering profits overseas, had $60 billion in government debt and about $153 billion in company bonds.

Microsoft held almost all its cash in Treasuries and debt issued by federal agencies, totaling $122 billion.

Google parent Alphabet had $66 billion, with about two-thirds in government securities.

How much money multinationals eventually repatriate is anyone’s guess. But tax experts and analysts agree that whatever they raise from selling bonds will likely go to enrich shareholders.

According to a recent study by Bloomberg Intelligence, the tax overhaul could lead to buybacks jumping by more than 70 percent on an annualised basis to $875 billion.

The analysis was based on the growth in completed repurchases in 2004-2005, the last time a tax repatriation holiday was in place. Apple may increase buybacks by $69 billion, adding to the $166 billion it spent on repurchases from June. 2012 to September, 2017, according to Gene Munster, a co-founder at Loup Ventures.

“There will be reasons for some very large bondholders to maybe shake some of these bonds out of the portfolio,” said Guy Moszkowski, a banking analyst at Autonomous Research.

Apple spokesman Josh Rosenstock declined to comment, as did Microsoft representative Sarah Elson. Google’s Winnie King declined to discuss the company’s plans for its overseas cash before its earnings in February, while Cisco spokeswoman Andrea Duffy said the company is reviewing the tax changes and that it will address the subject on its earnings call next month.

Big multinationals have good reason to bide their time, according to Richard Lane, a senior analyst at Moody’s Investors Service. Because their debt investments are so extensive, companies could end up inflicting losses on themselves with any large-scale selling.

“I don’t think there will be a rush to the door by these companies to sell this debt and causing increasing yields and lower pricing,” said Mr Lane. Regardless of what happens, what’s clear is that US multinationals will have little incentive going forward to hoard low-yielding Treasuries or investment-grade corporate bonds as a way to avoid the IRS.

Under the new tax law, companies that pay relatively low global effective tax rates – a sign they’re using tax havens – would pay a minimum US tax. Even if companies don’t sell outright, there’s going to be a “demand shock,” according to Michael Cloherty, head of US interest-rate strategy at RBC Capital Markets. The longer-term risk is that one of “the biggest buyer in some of these markets disappears.”