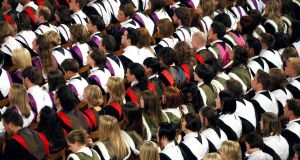 Ibec described the funding crisis in higher education as one of the biggest issues facing the State, eclipsed only by housing.

Ibec says it is getting worrying feedback from investors about the State’s lack of commitment to funding higher education.

The employers’ group said a funding crisis in higher education is one of the biggest issues facing the State, eclipsed only by housing.

It suggested that the recent Cassells report on higher education pointed to a lack of clear policy direction in the area.

“The perception in head office is that Ireland is falling behind other countries in terms of our commitment to funding higher education,” Ibec’s head of tax and fiscal policy Gerard Brady told The Irish Times. “It is clear in the international rankings,” he said.

The reduction in public expenditure on education over the past decade combined with rising student numbers has seen the Republic fall behind its competitors in the international rankings.

Trinity College Dublin lost its status as Ireland’s only top-100 university in the latest QS World University Rankings, published earlier this year, while six out of eight top-ranked Irish colleges fell in the rankings.

“What we are hearing is that projects are being lost and our reputation damaged by inaction on the issue,” Mr Brady said.

With the economy approaching full employment, the biggest challenge facing the Irish labour market will be finding workers to fill vacancies, he said.

“We believe the outlook for net migration is not as strong as it was in the mid-2000s,” Mr Brady said, noting wages in much of Eastern Europe are now closing in on those in that can be found in southern Europe.

“If we are going to keep growing at anything like the current rate then there must be a greater emphasis on funding the higher and further education sectors to upskill existing staff along with reform of the work permit system,” he said.

“Without those workers it is doubtful we can follow through, in a cost-efficient way, on plans to solve the crisis in housing and public infrastructure,” he said.

In a recent prebudget submission, Ibec criticised the Government’s plan to establish a so-called “rainy day fund”, suggesting the money be used instead to fund higher education.

It noted that the exchequer contribution per student has collapsed over the past decade.

Ibec agrees with the idea of ringfencing money in the upcoming budget but favours using it for a specific purpose, in this case higher education, that would give a strong return to the State and bolster competitiveness.