Tánaiste says special education likely to be followed by primary, exam years and others 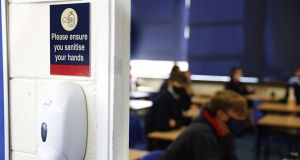 Talks between the Department of Education and unions are continuing this week with hopes that schools will be able to reopen on a phase basis between February and March. Photograph: Alan Betson / The Irish Times

Talks between the Department of Education and unions are continuing this week with hopes that schools will be able to reopen on a phased basis between February and March.

Tánaiste Leo Varadkar said on Monday night that while the Government was unable to say when schools would open exactly, it intended to open education on a phased basis beginning with children with additional needs from next month.

Special education is likely to be followed by primary schools, exam year groups and others.

“It is the next step we have to do. We have to continue to consult with the education partners,’ Mr Varadkar told RTÉ’s Claire Byrne Live.

“I cannot give a definite date to parents, but the one thing that we do intend is to open education on a phased basis across February and March, starting with those kids with additional needs,” .

“However, I can say to parents that the decision is to leave the restrictions fully in place until March 5th so we can get cases down to a much lower level and give hospitals a chance to recover.”

He said the Government wanted to start with special schools and children who have additional needs.

Mr Varadkar said case numbers were halving every 10 days, so it is “reasonable that in 20 days time it could be down to 400, but because of the new variant being more transmissible we want to open schools on a phased basis.”

“We have to consult with unions and parents groups and students, but we are reasonably confident that by mid-February we will be down to case numbers that were at the same level as when schools fully reopened last September.”

A spokesman for the Department of Education declined to comment on the status of talks with unions, except to say it the department’s ambition to reopen schools safely as soon as possible.

Mr Varadkar’s comments echo those of the Taoiseach Micheál Martin at the weekend, who said schools were likely to open on a phased basis from next month.

However, he said schools would not fully reopen in advance of St Patrick’s Day, indicating that it could be late March - shortly before Easter – before all children return to class .

Separately, second level teachers’ unions and student representatives are due to resume talks on alternative options to this year’s Leaving Cert exams this week.

With political pressure mounting on the Government, some kind of clarity is expected soon.

Michael Gillespie, general secretary of the Teachers Union of Ireland (TUI), said yesterday that while the hope very much remains that the exam can proceed normally, there is also the possibility of some kind of modified Leaving Cert reflecting time lost in physical attendance.