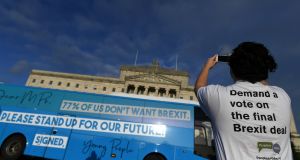 Business leaders across all sectors in Northern Ireland were “extremely frustrated” by the UK prime minister’s decision to park the House of Commons vote on her Brexit divorce deal.

Theresa May had received strong support from the North’s business community for her Brexit deal but many were clearly disheartened and concerned by her decision on Monday to defer the vote because of what she said were “clear concerns” among British MPs about the backstop agreement.

Ann McGregor, chief executive of Northern Ireland Chamber of Commerce and Industry, said the decision to delay the vote was “yet another delay” for businesses who were dealing with “real-world” issues, particularly currency challenges.

“Businesses are clear that time is rapidly running out. With just over 100 days to go until March 29th, many are already enacting contingency plans in the absence of clarity from Westminster.

“Earlier this year 37 per cent of NI Chamber members told us that they are already scaling down/freezing growth plans because of Brexit. Even basic business planning for next year has become difficult, if not impossible, for many firms and their investors.”

Mrs May’s decision to park the vote so late in the day has, according to Aodhán Connolly, director of the Northern Ireland Retail Consortium, only added to the heightened concerns shared by many businesses.

“It is imperative to retailers in Northern Ireland that they get clarity about their future trading relationship with our neighbours. A no-deal outcome would result in higher costs, harming consumers in Northern Ireland who already suffer from having half the discretionary spending power of those in the rest of the UK.

“Parliament must urgently find a workable proposal to avoid a cliff-edge no-deal scenario. The Brexit clock is ticking loudly,” he warned.

One of the North’s largest business bodies, Manufacturing NI, said it was already dealing with calls from worried and angry members about what the delay to the vote might mean for them.

“The country is clearly divided, parliament even more so. Yet apart from the withdrawal agreement, nothing else is real. If a better deal is available, it has yet to be articulated never mind negotiated, and we have no idea if it is practical and workable for businesses who have to pay wages this Friday and every beyond March 29th, 2019.

“We need a deal and we need it now so we can avoid a disastrous no-deal outcome,” the industry body warned.

From Newry to Poland

Meanwhile, as the crisis unfolded at Westminster, Newry-headquartered group MJM confirmed its plans on Monday to “establish a presence” in Poland.

The MJM group, which is a major marine outfitter and one of the North’s leading export firms, intends to expand its operations to Pruszcz Gdanski.

MJM said its new location would support key activities and projects at the company’s headquarters in Northern Ireland.

Gary Annett, MJM Group chief executive, said the Newry group has had a “long and proud association with Poland”.

“Many of our employees in Northern Ireland are originally from Poland, and we have very strong Polish supply chain.

“Opening a branch in Poland is part of our global expansion plans and a reflection of our commitment to attracting a talented pool of people and a robust supply chain from Poland and other EU countries.

“As the UK continues to navigate its way through the Brexit negotiations, it is prudent for MJM Group to expand our global reach to ensure we have the resources to continue to grow as a leader in the global marine outfitting market,” he said.

The mayor of Pruszcz Gdanski, Janusz Wróbel, has welcomed the Northern Ireland company’s decision to establish a base in Poland.

“We are pleased that MJM Group, a company which has been linked to the Pomeranian region for more than 10 years through its support of our local supply chain, has now decided to establish a permanent office in our city. We wish MJM Group every success here in Poland and in their global operations,” the mayor said.