Unemployment tops 20% due to Level 5 restrictions

Jobless rate down to 16% in August but rising with latest restraints, according to CSO survey 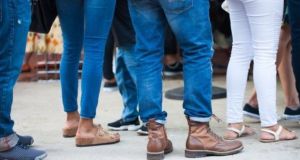 The Central Statistics Office said a positive demographic effect contributed an increase of 27,900 to the labour force.

The Republic’s unemployment rate has jumped to over 20 per cent as a result of the current Level 5 restrictions to curb the spread of coronavirus.

The headline figure, contained in the latest Labour Force Survey, equates to 501, 640 people and includes those on the Government pandemic unemployment payment (PUP).

This survey provides a snapshot of our labour market during the pandemic.

The jobless rate had fallen to less than 16 per cent in August but rose again with the latest restrictions.

The figures show there were 2.29 million employed in the third quarter, corresponding to an employment rate of almost 67.7 per cent for people aged between 15 and 64 years.

There were 174,700 people classified as unemployed, with an associated unemployment rate of 7.1 per cent. However, the Covid-adjusted measure of unemployment, which includes those in receipt of the PUP, was 15.9 per cent in the third quarter.

This rose to 20.2 per cent in October after the Government introduced new measures to halt the spread of the virus.

The latest survey, collated by the Central Statistics Office (CSO), showed employment fell in seven of the 14 sectors of the economy in the third quarter, with the largest rate of decline recorded in the accommodation and food sector, in which employment slipped by 16 per cent, or 28,600.

Part-time workers in the hospitality and retail sectors bore the brunt of the decline.

Conversely, the financial, insurance and real estate activities sector recorded an 8.2 per cent increase in employment over the same period.

The number of “actual hours” worked per week, a measure that more accurately captures the employment hit from coronavirus, reduced by 5.4 per cent to 70.5 million in the third quarter, said the CSO.

The total number of people in the labour force in the third quarter was put at 2.47 million, representing an increase of 14,900 (0.6 per cent) over the year.

The CSO said a positive demographic effect contributed an increase of 27,900 to the labour force. The participation rate, which is low by international standards, fell by 0.5 per cent to 62 per cent.

Minister for Finance Paschal Donohoe said the figures show that Ireland’s labour market continued to bear the fallout from Covid-19 and the associated public health restrictions in the third quarter.

“However the rise in total employment . . . shows how resilient Ireland’s labour market is,” he said.