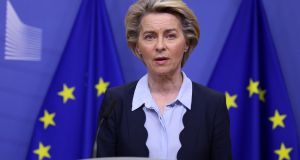 Hungary and Poland blocked the European Union’s landmark recovery package and seven-year budget on Monday in a rebellion over an attempt to withhold funds from countries that breach the rule of law, threatening a crisis in the bloc.

The two states exercised their veto as the EU capitals prepared to sign off on the €750 billion stimulus fund designed to counteract the economic damage of the Covid-19 pandemic, and the €1.1 trillion budget which is due to kick in in January.

Unanimous agreement is required to release the funding for EU projects in just over seven weeks’ time and to start the flow of recovery funds to hard-hit member states and maintain economic stability in the bloc.

“I think we have a crisis again,” a senior EU diplomat said. “We are back in crisis.”

A separate EU diplomat said the move threatened to undermine confidence in the bloc’s ability to reach agreements, as Poland and Hungary had previously agreed to the budget and recovery plan in July, which contain billions of euro in funds for each country.

“It’s quite exceptional, it’s a very exceptional situation we are in,” the diplomat said. “When we reached the agreement in July, it was a moment of optimism that the European Union can take important steps in times of crisis. And now, you give a signal that even if something is agreed by political leaders there can still be a blockage. This is not something that gives a good signal from the European Union’s decision-making process.”

The two countries announced they would not sign off on the 2021-2027 budget or recovery fund in objection to the introduction of a new system whereby funds could be withheld from countries that are found to be failing to uphold democratic standards, interfering with judicial independence or breaching the rule of law.

The rule of law mechanism did not need the unanimous support of all member states to be approved, so Hungary and Poland blocked the two financial agreements instead.

The nationalist governments of Budapest and Warsaw have both been subject to formal EU proceedings in recent years on suspicion of interfering with the independence of the judiciary, but have used their vetoes to protect each other from sanctions.

Negotiations on how to resolve the crisis are expected to continue as national leaders prepare to meet via video conference later this week. A spokesman for the Polish government said it was “open to constructive solutions, as long as they are in line with the European Council conclusions and EU treaties”.

The last-minute obstacle is likely to delay the issuance of the recovery funds, which had been scheduled to start being rolled out in mid-2021, while the budget money is needed for EU programmes from January 1st.

“Everybody who respects the rule of law has nothing to fear of this mechanism,” said Manfred Weber, heads of the biggest group in the European Parliament the European People’s Party. “Denying the whole of Europe crisis funding in the worst crisis since decades is irresponsible.”