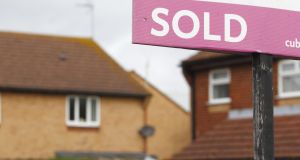 The Economic and Social Research Institute is forecasting 24,000 new home completions this year, a figure that is widely queried. Photograph: Chris Ison/PA Wire

In an era of tightly controlled mortgage lending, weakened banks and sluggish wage growth, how is it that we have double-digit, turbo-charged house price growth?

The simple answer: cash buyers. Cash investors have ploughed into the property market since the low point in 2011-2012, correctly assuming that prices wouldn’t stay on the floor forever, not with the natural bounce back that accompanies most crashes.

Their bullish stance has been aided by the speed of recovery and the rapid return to full employment combined with a near-complete collapse in construction, which has accelered the gap between supply and demand.

The Government’s aversion to take on a major social housing building project and its obstinate adherence to rental supplements as the chief solution to affordability has further supported prices and rents.

And so we arrive at a point, where property price inflation of 12.5 per cent is glumly accepted as a fact of life, home ownership is prohibitive for most of the population under a certain age and inequality in western countries, predicated on property ownership – not salaries, has reverted to a level not seen since the 1920s.

The latest barometers on the market here, from property websites MyHome.ie and Daft.ie, suggest a possible cooling of headline inflation from over 10 per cent to 7-8 per cent depending on the report but will provide little comfort for those clinging to the hope of being able to buy.

The Economic and Social Research Institute (ESRI) is forecasting 24,000 new home completions this year – a figure that is widely queried – and up to 30,000 in 2019.

These levels are still thought to be well below the level of structural demand, which the institute estimates to be in the region of 35,000, meaning prices will continue to grow strongly for the foreseeable future.