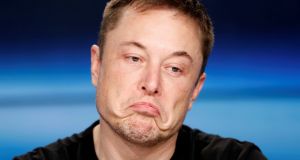 Tesla shares were back on the ropes on Monday, dropping more 6 per cent within minutes of the opening bell as investors continue to digest the slate of negative headlines around the electric car company

The Office of the Data Protection Commissioner is to meet tomorrow to examine the implication of the investigation into an alleged data breach at Independent News & Media (INM). A number of public figures say they believe their data may have been accessed. The Office for the Director of Corporate Enforcement (ODCE) is seeking the appointment of inspectors by the High Court to investigate various events at the media organisation.

The Government is expected to come under pressure to crack down on so-called “synthetic lotteries” after Australia last week moved to ban third-party betting on national lottery games. Australian authorities announced it would prohibit lotto betting firms such as Lottoland and Jackpot. com, which the National Lottery here has described as “parasites”, from taking bets on lotteries there.

As fears of a trade war between the world’s two biggest economies intensified, China slapped extra tariffs of up to 25 per cent on US frozen pork, wine, fruits and nuts, in response to US duties on imports of aluminium and steel.

House prices nationally are continuing to rise but at a slower rate due to tighter bank lending and “stretched affordability in Dublin”, according to MyHome.ie.

CRH faces the prospect of shareholder pressure to seek a partial or full separate listing of its key US operations as a way of unlocking value in the building materials giant after a weak performance by its shares over the past year.

Joe Brennan talks to the boss of Irish energy trading firm ElectroRoute, who is hoping to build on the sale of a 60 per cent state in the business to Japanese giant Mitsubishi. Ronan Doherty sees opportunities for the business in Japan’s recently deregulated power market, and the Mitsubishi link can certainly open some doors.

Tesla shares were back on the ropes on Monday, dropping more 6 per cent within minutes of the opening bell as investors continue to digest the slate of negative headlines around the electric car company. Investors also took a dim view of a tweet from chief executive Elon Musk, attempting to make light of Tesla’s woes by joking over the weekend that his company had “gone completely and totally bankrupt.” He posted a picture of himself pretending to be passed out while holding a sign that read “Bankwupt!”.

In your money, Fiona Reddan explains why purchasing property with your pension fund can result is significant tax savings.