Economy is showing resilience to the Brexit vote, with GDP growth better than expected 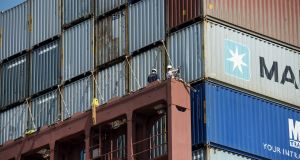 The UK current-account deficit widened in the third quarter as Britain posted its worst trade performance in almost three years.

The UK current-account deficit widened in the third quarter as Britain posted its worst trade performance in almost three years.

The difference between money coming into the UK and money sent out was £25.5 billion, the Office for National Statistics said on Friday. That’s equal to 5.2 per cent of gross domestic product. The trade deficit widened to 2.8 per cent of GDP, the most since the fourth quarter of 2013.

The current-account deficit is forecast to be double that of the US this year, at more than 5 percent of GDP, but concern has been partly allayed by the cheaper pound, which is expected to boost exports and reduce spending on imports.

Economists see the shortfall narrowing to about 4 per cent of GDP in 2017, making Britain less reliant on the willingness of foreigners to keep buying UK assets.

The economy is showing resilience to the Brexit vote so far, with separate figures showing GDP grew 0.6 per cent in the third quarter, more than the 0.5 per cent previously estimated. Consumers once again drove the expansion, offsetting the biggest drag from trade since 2012.

“Robust consumer demand continued to help the UK grow steadily in the third quarter of 2016,” said ONS statistician Darren Morgan. “Growth was slightly stronger than first thought, though, due to greater output in the financial sector.”

Corrections to trade data meant the current-account deficit was smaller than previously thought over recent quarters. It peaked at 5.5 per cent of GDP in the fourth quarter of 2015 instead of 7 per cent.

Consumer spending grew an unrevised 0.7 per cent and business investment rose 0.4 per cent, less than the 0.9 per cent previously thought. There were slight downward revisions to overall growth rates in the first and second quarters.

The gap between what British investors earn on their foreign investments and what foreigners earn on their investments in Britain narrowed to 1 percent of GDP from 1.8 per cent in the previous quarter. The weaker pound is expected to cause that shortfall to narrow by boosting the sterling value of inflows.

The dominant services sector grew 0.3 per cent in October from September, helped by retailers. It suggests the economy maintained momentum going into the fourth quarter despite declines in construction and industrial production. Economists see a slowdown next year as Brexit uncertainty hits investment and accelerating inflation saps consumer spending.

1 Money matters: ‘My father embarrassed us with his haggling’
2 Pilita Clark: When a rude boss keeps you waiting, why not walk out?
3 Comcast acquires Irish cloud-based telco Blueface
4 NI house builder apologises to Harry and Meghan over adverts
5 Are there annual limits on inheritances or gifts to a child?
6 US threatens retaliation against EU over proposed carbon tax
7 Opioid executive admits to ‘no morals’ ahead of prison term
8 Volvo warns of scaled back car line-up if UK splits from EU rules
9 CPL founders Anne Heraty and Paul Carroll in line for €1m dividend payout
10 Restaurants put VAT cuts at the top of their pre-election menu
Real news has value SUBSCRIBE