Government says ECJ ruling has no bearing on Apple case 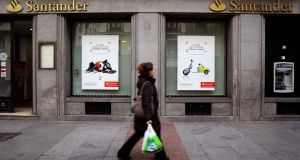 ECJ decision casts doubt on tax concessions offered to companies such as Santander.

The Government has dismissed suggestions that a ruling by Europe’s top court on tax concessions given to Spanish companies represents a setback for the State’s appeal against the Apple tax ruling.

The European Court of Justice’s (ECJ) ruling on Wednesday cast doubt on a tax scheme used by some Spanish firms to reduce their corporation tax liability, and appeared to back the European Commission’s view that it constituted a breach of state aid rules.

The verdict was seen to give an insight into the court’s likely stance on the European Commission’s €13 billion tax ruling in relation to Apple, which is being appealed by the Government.

However, this was rejected by the Department of Finance.

“It is a complete overstatement to say that the Irish appeal of the Apple decision is dependent on the outcome of the Santander and Autogrill decision of the European Court of Justice, or that today’s judgement is crucial for the Irish case,” a spokesman said.

“The facts and the approach in the Santander and Autogrill cases are very different from those that have now been presented in the final decision in the Apple case,” he added.

However, Sinn Féin finance spokesman Pearse Doherty said the ruling shows why the Government’s decision to appeal the Apple decision will be a waste of money.

“The spin that the Apple ruling was a case of the commission exceeding its powers is now debunked,” he said.

In its ruling, the Luxembourg-based court said EU’s General Court had been mistaken in deciding that the European Commission had not managed to demonstrate that a group of companies had been singled out by the programme. The scheme, which offers tax breaks for firms with a 5 per cent shareholding in a foreign company, will now have to be re-examined by a lower court.

The European Commission welcomed the judgment, saying its state aid decisions were reinstated and that it would now work with Spanish authorities to recover the aid granted.

In a separate ruling, the ECJ also decided that homeowners affected by so-called “floor clause” mortgages should be reimbursed money dating back to when their mortgage contract was signed. Previously, they were only entitled to reimbursement as far back as May 2013 when the Spanish Supreme Court first ruled that such mortgages were unlawful.

Banks started to offer the now-infamous “floor clause” mortgages during Spain’s decade-long economic boom, which was fuelled by the property sector. The clause ensured that the homeowner would have to pay a minimum amount of interest, despite having contracted a variable interest mortgage. When European interest rates plummeted, these clients – numbering around three million – continued to pay a higher monthly rate than other homeowners.

The Luxembourg-based court said that limiting the timeframe to 2013 “makes consumer protection incomplete and insufficient and is not an adequate and effective means for preventing the use of unfair terms”.

Estimates vary as to how much lenders will have to pay back clients as a result of the ruling, with financial consultancy AFI putting the figure at approximately €4.5 billion.