Taking on the Goliath that is the German motor industry

Berlin lawyer’s case will ask the question: do air quality laws exist on paper or in practice? 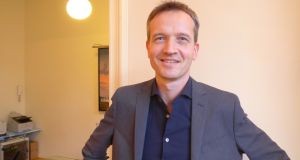 Lawyer Remo Klinger: “Cars are for Germans what small arms are for the Americans. As soon as someone tries to do anything to limit the car, huge resistance builds up”

With a youthful gleam in his eye, Berlin lawyer Remo Klinger is a perfectly cast David to face down the Goliath that is the German motor industry and what he sees as its cosy cartel with politicians.

The 48 year-old has in his sights the engine invented in Germany by Rudolf Diesel in 1903, but which for the last two years has been the source of an almighty cloud of scandal in Germany and around the world.

Revelations of widespread engine software manipulation by German auto companies has seen diesel car prices fall, and, as multi-billion legal actions continue on both sides of the Atlantic, VW is under pressure again over exhaust tests on monkeys.

After 12 years of legal action Prof Klinger is not wasting any more more time on the familiar problem – the scale of diesel cars breaching EU limits on the road. Instead he has zeroed in on the knock-on effect.

On February 22nd, Germany’s federal administrative court in Leipzig will be asked to decide whether inner-city bans on diesel vehicles, as demanded by Prof Klinger and his environmental lobby clients, are a legal, appropriate and proportionate remedy for inner-city air pollution.

The lawyer’s plan: to hoist German politicians by the petard of their own illusory emission laws which companies have been ignoring for years. His case will flag the flawed testing regimes and the fairytale of “clean” diesel to ask a simple question: do air quality laws exist on paper or in practice?

It’s a daring case and not without risk, Prof Klinger admits, given Germans’ close emotional attachment to their cars.

“Cars are for Germans what small arms are for the Americans,” he says with a grin. “As soon as someone tries to do anything to limit the car, huge resistance builds up.”

Sitting in his Berlin office meeting room – a vast room with a ceiling painted to look like a cloudy blue sky – the lawyer explains the winding road to court since 2005 that, more by accident than design, has collided with the Dieselgate debate.

For years his clients, Environmental Action Germany (DUH), have been gathering the dirt on German city air. Stuttgart, home to Mercedes parent company Daimler, is the worst, with average levels of nitrogen-dioxide, emitted by diesel engines, twice the EU limit of 40 micrograms/m3. Some Stuttgart streets also breach EU fine-dust particle limits on over 60 days in a year.

But next week’s test case arises from an air quality battle in Düsseldorf, but its outcome will affect around 19 other cases: in Frankfurt, Berlin, Munich. Given some 40 German cities are in breach of EU air quality levels, according to the DUH, the time has come to give German politicians a kick up the backside.

Demonised by the motoring lobby, DUH campaigners say they know how people need their cars to get to work, and like the freedom to choose their mode of transport.

“But when that individual freedom stands in contradiction to general public health, what is the price of individuality?” says Dorothee Saar, DUH’s transport and air quality expert.

On a shelf in her organisation’s meeting room is a stone cherub wearing a gas mask: a reminder of what this campaign is about for the DUH, founded in 1975 and now one of Germany’s leading independent environmental lobby groups.

The DUH is not fighting an illusory battle against mobility, she says, but is using the threat of diesel bans to force politicians to act. In the short term it wants independent testing of car emissions, and hardware upgrades for older diesels to make them conform to emissions laws.

Its long-term goal: real public debate about the future of urban mobility feeding into joined-up thinking in city planning. The starting point: accepting and acting on – rather than denying – an urban air pollution problem the EU estimates kills around 400,000 people annually in Europe – more than road deaths. In Germany the death toll is around 10,000 annually.

“If 10,000 people died from dirty water we’d have uproar, but air pollution isn’t tangible, and the people who suffer have no lobby – but manufacturers do,” said Saar of the DUH.

The DUH is calling for concrete action: realistic transition periods for diesels, is open to some exceptions for commercial diesel vehicles but is pushing for politicians to demand – rather than ask – car firms to take back dirty diesels and perform engine fixes at up to €2,000 a go.

Recent coalition talks in Berlin suggest German politicians still have some way to come in their thinking and actions. Despite two years of disastrous diesel revelations, and a 12-year legal battle now coming to a head, German politicians’ most common refrain in recent weeks has been about the need to avoid diesel bans – never about cleaner air.

For Prof Klinger this case is as much about massive political failure in Germany as the human cost of air pollution.

“The least I would expect from my politicians is for them to act and solve this long-running problem. Instead they stand there quivering before the industry, like a rabbit before a snake.”

As the energetic lawyer makes his final preparations for the court case on Thursday week, he has no illusions about his powerful, well-connected and deep-pocketed opponents: in an industry with over €400 billion revenues. As our interview wraps up, he announces cheerfully how he is sure his mobile phone is tapped.

“I remember watching one day as the cursor on my Blackberry moved on its own through my address book,” he said. “There’s never been a threat of violence, they’re far more gentlemanly than that. But in Germany everything is being done behind the scenes to protect this industry.”