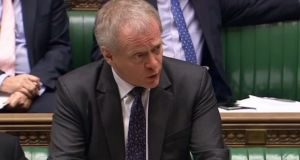 British prime minister Theresa May has suffered a ministerial resignation ahead of crunch Commons votes on Brexit, with Phillip Lee hitting out at the Government’s “irresponsible” approach.

Remain-supporting Dr Lee quit as justice minister on Tuesday, saying he could not support “how our country’s exit from the EU looks set to be delivered”.

He said his main objection to government policy was over the “wish to limit parliament’s role in contributing to the final outcome” and signalled he would rebel on the issue in the Commons later.

Dr Lee also called for the government’s final proposals to be put to the public in a second referendum.

“When the government is able to set out an achievable, clearly defined path, one that has been properly considered, whose implications have been foreseen, and that is rooted in reality and evidence, not dreams and dogma, it should go to the people, once again, to seek their confirmation,” he wrote.

The issue of a “meaningful vote” is set to be a flashpoint in the Commons, with ministers seeking to overturn a Lords amendment which would give Parliament extensive powers to direct ministers how to proceed if a deal with Brussels is rejected by MPs or no deal is reached.

The government’s compromise is that a minister would come to the House within 28 days of a deal being rejected to tell MPs what will happen next, but an amendment tabled by former attorney general Dominic Grieve would insist on a binding Commons motion.

Dr Lee, who represents the Leave-voting Bracknell seat, said in a lengthy resignation statement: “Our parliament should be able to direct our government to change course in our interests.

“In all conscience, I cannot support the Government’s decision to oppose this amendment because doing so breaches such fundamental principles of human rights and parliamentary sovereignty.

“A vote between bad and worse is not a meaningful vote. And I cannot bring myself to vote for it in the bastion of liberty, freedom and human rights that is our Parliament.”

Dr Lee added: “If Brexit is worth doing, then it is certainly worth doing well; regardless of how long that takes. It is, however, irresponsible to proceed as we are.”

A Downing Street source said: “We will get a good Brexit deal that works for everybody in the UK.

“The government’s amendment today provides for a meaningful vote.”

Dr Lee’s shock departure came as David Davis warned potential Tory rebels that they cannot undo the EU referendum, ahead of a tricky 48 hours in which the government will try to get its Brexit programme back on track.

“A meaningful vote is not the ability to reverse the decision of the referendum, he told BBC Radio 4’s Today.

“We will put in front of parliament the decision for them to vote ... after that there will be a process of primary legislation to put the actual details of it in parliament, so parliament will actually decide on the application of the detail.”

Asked what would happen if they voted against the deal, he said: “If they throw it out, well, they throw it out. We will have to go away, think about it and come back and make a statement, which is what I am saying to the House this afternoon.”

However, Devon Tory Sarah Wollaston signalled on Tuesday morning that she would back Mr Grieve’s amendment.

Dismissing the Government’s compromise, she tweeted: “Merely issuing a statement in response would make it a meaningless final vote.

“Grieve’s amendment puts that right and in a way Govt could and should accept it.”

She said unless there was a “meaningful vote” parliament would be left with “the grim choice between a poor deal and exit with no deal at all”.

It would also give hard Brexiteers the chance to “scupper a good deal”, she claimed.

The prime minister appeared to have defused a potentially explosive row over the EU customs union on Monday night as Tory pro-Europe rebels Sir Oliver Letwin and Nicky Morgan and Brexiteers Jacob Rees-Mogg and Sir Bill Cash came together to table a separate compromise amendment backing “a customs arrangement” with the EU.

Government sources signalled that ministers were set to back the move.

However, the compromise is only likely to delay a full-blown showdown on the customs union until trade legislation returns to the Commons in July. - PA