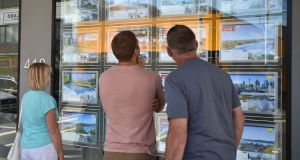 Central Bank figures show that, for owner-occupiers, the percentage of loans in negative equity was 8.7 per cent in the third quarter, down from a post-crash peak of 36.2 per cent. Photograph: Peter Parks/AFP/Getty Images

The number of homes in negative equity is just a quarter of what it was at the end of the crash – but that still amounts to nearly one in 10 of all mortgages, which is high by international standards.

According to figures from the Central Bank, negative-equity loans accounted for just 9.6 per cent of all home loans in the third quarter of 2017. That equates to 75,000 mortgages.

The upturn in the economic environment and the related rise in house prices has contributed to an improvement in the asset quality of bank loan books and has reduced the number of borrowers in negative equity, the Central Bank said in a special report accompanying its latest macro financial review.

With house prices still some 23.7 per cent below their 2007 peak, the report said negative equity remains a prominent, if diminishing, feature of the Irish housing market, however.

The problem is most typically associated with those who bought homes in the lead-up to the crash.

Negative equity can have adverse consequences for the wider economy by preventing or delaying households from selling properties. Research shows that consumers with underwater mortgages tend to consume less.

Equally, loans in negative equity have a greater risk of default.

The Central Bank figures show that, for owner-occupiers, the percentage of loans in negative equity was 8.7 per cent in the third quarter, down from a post-crash peak of 36.2 per cent.

Buy-to-let properties had a higher share of negative equity throughout the period, with 15.6 of investment residential properties currently in negative equity, down from 54 per cent in the final quarter of 2012.

For borrowers outside Dublin, about 30 per cent of loans that originated during the 2005-2009 period remain in negative equity: in Dublin, which has seen the biggest recovery in property values, the figure is slightly lower.

“Negative equity in the Irish mortgage market has been in decline in recent years,” the Central Bank said. “As well as being of benefit to individual borrowers, this can be beneficial to overall financial stability, including through positive effects on consumption and consumer confidence and by aiding housing mobility,” it added.

The bank also noted that, with cumulative house price inflation of about 15 per cent expected over the next three years, a further substantial reduction in negative equity was likely by 2020.

1 Companies without tax clearance shut out of Covid wage subsidy
2 Coronavirus spreads to sandwich king
3 The Irish Times Company of the Year: the three finalists
4 Ufurnish: ‘It’s like Skyscanner, but for furniture’
5 Avoca warns of redundancies due to coronavirus
6 BT and Arnotts unlikely to be last retail victims of Covid-19
7 Errant texts highlight weaknesses in banks’ digital shift
8 Virgin Media pulls the plug on sports coverage for Eir customers
9 US treasury forced to pay up to fund record stimulus
10 McGann stepping down at troubled Aryzta
Real news has value SUBSCRIBE