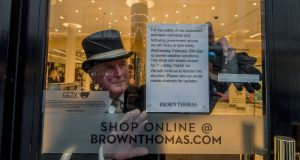 The group expects footfall in the city centre to drop sharply between Wednesday and Friday and noted on Wednesday it was down by about 70 per cent. That translates into a loss of turnover of about €5 million a day, it added.

Dublin Town chief executive Richard Guiney said retailers were unlikely to recoup the money they would lose over the coming days. If weather issues run into Saturday the losses will be worse, he added.

While a generally negative picture for retailers, Graeme McQueen of Dublin Chamber noted some of the bigger retailers had seen a boost to online shopping. He also noted that while footfall had fallen in Dublin’s city centre, those who were shopping had “made a real effort to be there” while a number of people had been shopping before the bad weather hit, given the event had been “well flagged”.

“There’s no getting away from it, there is going to be an impact on lots of business. For the smaller guys, they’ll be hoping to get back up and running as soon as possible,” Mr McQueen added.

Commneting on the challenge facing business the Minister for Business, Enterprise and Innovation Heather Humphreys said: “The most important thing for everyone at this time - Government, citizens and employers - is safety. This is the paramount and overriding concern for everyone.” .

The big retail multiples have either announced a closure of stores across Leinster and Munster, in accordance with the status red weather alert, or reduced opening hours.

Dunnes said it would close stores in affected areas on Thursday and reopen on Friday at 1pm.

Tesco said its stores in both provinces would be opening later at 9am on Thursday and closing early at 2pm to give staff a chance to get home, while on Friday the same stores would opening at 1pm and closing at the normal time.

A spokesman for SuperValu and Centra stores said individual stores would decide whether to open on Thursday and there would be some store closures or reduced opening hours as a result in affected areas.

“While we are mindful of the importance of individual stores in the local community, the safety of our staff and customers is paramount and we apologise for any inconvenience caused,” he said.

Discounter Lidl, meanwhile, has decided to close all stores in Leinster and Munster from 3pm on Thursday until 1pm on Friday. Aldi said all stores would remain open on Thursday but that it would monitor the situation.

A raft of businesses were forced to close on Wednesday across Leinster and in some parts of Munster. Banks including Permanent TSB, Ulster Bank and Bank of Ireland all had closures while AIB was criticised by the Financial Services Union for not “implementing a clear policy” thus leaving staff “in a very difficult position”.

The Irish Hotels Federation (IHF) said that while it was difficult to quantify losses, a number hotels had lost conferences which could be worth between €20,000 and €30,000. Michael Lennon, president of the IHF, instanced his own hotel, noting that people who had cancelled for this weekend were, in most cases, rebooking, while current guests were staying on longer to avoid travelling.

Like most business groups on Wednesday, Ibec urged business to ensure the safety of employees and, where possible, support remote working.

1 Irish company paid €1.2m a year by collapsed Blumenthal-linked Australian restaurant
2 Hugo MacNeill steps back from Goldman Sachs role
3 Should AIB compensate me for upsetting letter on arrears?
4 Legal eagles yet to land; economy to grow 3.4% this year; and CEOs on social media
5 Greencoat Renewables buys Clare wind farm for €35.4m
6 Tax shifts won’t drive multinationals out of Ireland - Moody’s
7 Irish economy to grow by 3.4% this year, predicts EY
8 ‘I wouldn’t be a big saver. I tend to buy now and repent at leisure!’
9 Poll on second election, concerns over Irish pension gap, and Ireland’s rich list
10 Why bosses should not be afraid of speaking out on Instagram
Real news has value SUBSCRIBE