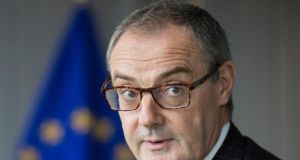 David O’Sullivan, former Irish secretary-general of the European Commission, has moved into the private sector to join the Brussels office of legal firm Steptoe & Johnson.

The former Irish secretary-general of the European Commission David O’Sullivan has moved into the private sector to join the Brussels office of legal firm Steptoe & Johnson.

Mr O’Sullivan, who retired from the commission a few months ago after serving as EU ambassador to the US, brings to a consultancy role years of experience in trade policy and US-EU relations, not least in the negotiations over the WTO Doha round and in responding to the Trump turn against the latter and European trade. But he will also be advising clients on a range of regulatory and compliance issues.

He will not be involved in lobbying or advocacy work.

He is a graduate of Trinity College Dublin and of the College of Europe, Bruges.

Steptoe & Johnson is an international legal firm with more than 500 lawyers and other professional staff offices in in Beijing, Brussels, Chicago, London, Los Angeles, New York, San Francisco, and Washington.

1 Bogus notion that supply will cure our housing woes
2 Life as a Facebook moderator: ‘People are awful. This is what my job has taught me’
3 Bank leaked my loan request to family who tried to rip me off
4 Irish companies restrict travel over coronavirus fears
5 Suspicions rife as key Brexit trade talks begin in Brussels
6 ‘The only time apartments were viable was in . . . Ballsbridge, Killiney and Dalkey’
7 Corona beer firm reeling after 8% slide due to coronavirus
8 We have little chance of building enough homes to meet election promises
9 Coronavirus: Iseq down 11% in five days as global sell-off is worst week since 2008 crisis
10 Coronavirus: ‘All bets are off’, says aircraft industry chief
Real news has value SUBSCRIBE