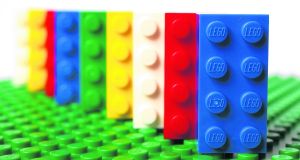 Sometimes, a Lego session uncovers an awkward truth about the organisation that none of the senior team had previously dared acknowledge.

I’m pleased to announce that last week I took some significant steps towards solving the climate crisis. Not on my own, you understand: with a group of near-strangers, a patient facilitator, and a large pile of assorted Lego.

The opportunity to play with small coloured bricks for an afternoon was an appealing alternative to more conventional conference panels and talks organised by the Global Peter Drucker Forum, an annual conference honouring the management thinker.

That is part of the point of “Lego Serious Play”: to provoke managers into alternative ways of visualising, understanding and tackling complex strategic problems. Using the trademarked system, under an open-source licence from the Danish toymaker, trained coaches give managers Lego components and encourage them to create models.

For anyone who has undergone the slow hell of a team-building exercise, this will sound all too familiar. From improv sessions to whitewater rafting, the idea of normally desk-bound grown-ups awkwardly bonding while on awaydays has infinite comic potential. There is a reason why when multinationals boast about new strategies, they are more likely to cite the contribution of a McKinsey or a Boston Consulting Group than remind the world that their chief executive was once seen elbow-deep in a toy box rootling for Duplo.

When Johan Roos and Bart Victor came up with the Lego concept in the late 1990s, as the first wave of internet disruption was lapping at the boardroom door, they aimed to shake up conventional corporate strategy discussions. “I was struck by how much sameness came out of those meetings,” says Prof Roos, now at Hult International Business School. When he introduced Lego, suddenly the same executives were “more engaged, their language was much richer: they started telling stories”.

I met a few delegates to the Drucker Forum who had their doubts about the hard benefits of such an unorthodox approach. I can see the advantage, though, of giving executives new perspectives - whether that is through free play, awaydays, or reading more novels.

Such activity can nudge them into the kind of productive and creative flow that traditional strategy-setting sessions kill. Ed Catmull, the co-founder of Pixar Animation Studios, has seen this process from the creators’ angle. “I define creativity in a very general way,” he told the conference. “It’s solving problems.”

One key to the Lego system’s success, according to the 2004 paper in which Prof Roos and others sought to define “serious play”, is that it “intentionally brings the emergent benefits of play to bear on organisational challenges”.

“Play” smacks of frivolity and childishness, not serious business. But it is exactly this unleashing of underused creative powers that advocates of the Lego system hope to encourage. “You can co-create knowledge very fast this way and work at a higher level of complexity,” says Micael Buckle, chief executive of Inthrface, a Danish consultancy, who has led hundreds of Lego Serious Play sessions, including the one I took part in last week. “Solving” climate change - or at least imaginatively modelling the principal problems and jointly coming up with possible remedies - took us less than three hours.

The climate discussion was a proxy for the sort of strategic issues that managers more usually address over the course of a day. Prof Roos says demand for serious play sessions has spiked in the past two years as companies confront rapid change.

I am more sceptical about what happens at the end of the process. It was notable that when we turned away from the Lego and tried to sum up our conclusions on a flip chart, the creative energy died as we struggled to find the precise words for what we had been discussing easily seconds earlier. I picture bosses ordering minions to turn the colourful mass of Lego models their team has just created into the usual banal strategy document.

This translation does happen, but because the top team has bought in to the Lego version of the strategy, it is not as deadening as you might expect. At the same time, when the written strategy review arrives, participants can better visualise the situation that lies behind the boring bullet points.

Mr Buckle says serious play sessions run into difficulty for different reasons. Some companies look for yes-or-no answers to complex questions. Occasionally, chief executives have already decided what they want. It is not unknown for them to ask coaches to manipulate the model making so it points in the direction they have already chosen.

Sometimes, a Lego session uncovers an awkward truth about the organisation that none of the senior team had previously dared acknowledge. But if a day playing with Lego shows that everything is not as awesome as the top team thought, it should be counted as a success. – Copyright The Financial Times Limited 2019