EU hits Bourbon and Harley-Davidsons in response to US tariffs

The European Union will impose counter measures after the United States decided to no longer exempt it from steel and aluminium tariffs, Jean-Claude Juncker has said. Video: Reuters 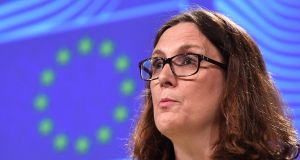 The EU has “closed the door” on trade talks with the US after the White House hit the continent with tariffs on steel and aluminium, said Brussels’ top trade official.

EU trade commissioner Cecilia Malmström said Europe would no longer continue talks over liberalising parts of EU-US trade after negotiations over getting a permanent exemption from steel tariffs failed.

“We are not going to enter into any negotiations,” said Ms Malmström.

The EU has said it will hit back with its own “countermeasures” on €2.8 billion of US products like bourbon and Harley-Davidson motorbikes in response to US president Donald Trump’s actions. Ms Malmström said tariffs would be “measured” and “proportionate”.

European officials fear the Trump administration could widen its duties to include the continent’s prized car sector. Ms Malmström said the EU was following the debate on automobiles with “anxiety”. Mr Trump has ordered a trade investigation into car imports into the US.

“When they say American first, we say Europe united,” said Ms Malmström. “We are not in a trade war but in a very difficult situation caused by the US.”

Ms Malmstrom has argued that the EU had engaged in negotiations with US trade officials, including offering to further liberalise parts of the market, but these had been rebuffed by the United States.

“We offered dialogue and future negotiations under the condition they took away this threat. They didn’t and here we are,” she said.

Meanwhile, speaking to RTÉ, former taoiseach John Bruton said “we’ve got to be patient and stay united. If the European Union is united, particularly if it has Canada and Mexico united with it, we can exercise very great influence in the United States. On the other hand, if each country of the 28 EU countries were tor try to make its own special deal with American, then none of us would prosper.”

Earlier the other states hit by US steel and aluminium tariffs responded with their own penalty schemes. Mexico, complaining that the tariffs will “distort international trade” threatened to penalise US imports including pork, apples, grapes, cheeses and flat steel.

In Canada, prime minister Justin Trudeau said the tariffs were “totally unacceptable”. Canada announced plans to slap tariffs on 12.8 billion Canadian dollars’ worth of US products, ranging from steel to yoghurt and toilet paper.

The American Chamber of Commerce in Ireland called on the EU to intensify negotiations with the US to avoid a tit-for-tat response. But it refrained from criticising the American measures directly.

“The introduction of tariffs is very serious, and it is very important that the EU seeks a negotiated solution rather than potentially escalating the situation,” said chief executive Mark Redmond.

The statement was in marked contrast to a statement by the Brussels branch of the American Chamber which criticised the US moves and urged the US government to revisit its plans while calling on the EU to take a “balanced approach” in responding to the measures.