British to consult NI politicians on Brexit despite looming vote

Theresa May rules out postponing Brexit talks launch, due before the end of March 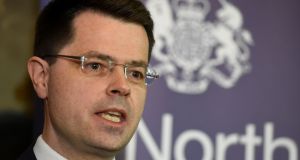 The British government has said it will continue to consult Northern Ireland’s politicians about plans for Brexit negotiations, despite the Assembly elections set for March 2nd.

Prime minister Theresa May has ruled out postponing the launch of formal Brexit talks with the European Union, which are due to start before the end of March.

The prime minister’s official spokeswoman said on Monday, however, that planned meetings on Brexit of the Joint Ministerial Committee (JMC), which brings together ministers and officials from the British government and the devolved administrations, would go ahead. A sub-committee of the JMC will next discuss Brexit on Thursday.

The prime minister called Arlene Foster and Martin McGuinness on Monday morning, urging them to make a last-ditch effort to find agreement.

“She spoke to both Arlene Foster and Martin McGuinness to encourage them to use what time was left today to try to find a resolution to the situation in Northern Ireland, outlining the importance of finding a way forward - particularly in the context of wanting to make sure that Northern Ireland has a voice in the UK’s exit from the European Union as we approach the critical period before triggering Article 50,” her official spokeswoman said.

“Northern Ireland now faces extremely important and difficult negotiations over Brexit. Now more than ever the people of Northern Ireland need a strong, functioning government to ensure that their voice is heard, not least as a majority of people in Northern Ireland voted to remain in the European Union,” she said.

“I would urge the Secretary of State to continue talking to all political parties during this deeply challenging period. In particular, there should be no delay to establishing an independent inquiry into the RHI scheme, which is desperately needed to restore confidence and trust in politics.”

Mr Brokenshire was legally obliged to declare an election date after the deadline for Sinn Féin to nominate a replacement deputy first minister passed at 5pm on Monday.

He said nobody should underestimate the challenge the current crisis represents for the political institutions in the North.

“While it is inevitable that debate during an election period will be intense, I would strongly encourage the political parties to conduct this election with a view to the future of Northern Ireland and re-establishing a partnership government at the earliest opportunity after that poll,” he said.

In a speech in London on Tuesday, Ms May will signal that Britain is likely to leave the European single market and the customs union after Brexit.

The prime minister, the Taoiseach and the outgoing First Minister and Deputy First Minister have all stated that there must be “no return to the borders of the past”.

Britain’s departure from the customs union would, however, make some form of customs controls at the Border unavoidable.