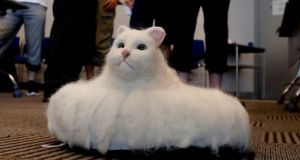 Number of pizzas sold by the chain Domino’s during the Fifa World Cup (despite the fact that the final was on at the pizza-unfriendly time of 4pm).

Percentage rise in sales in the first half of 2018 from Domino’s outlets in the UK, where it controls almost half the pizza delivery market.

Percentage rise in Domino’s sales in the Republic, where it will be hoping for a Goldilocks autumn after a “slower” first half marked by “consistently adverse weather conditions”.

Image of the week: Robocat

The robot of the week award goes to forlorn robot cat Ballon, pictured here at the Underground Maker Festival in Tokyo on Sunday looking about as impressed as a real cat would had it been degraded in this way. Japanese artist Daiki Sako created Ballon by combining a robot cleaner with the handcrafted head and body of a cat, saying he was inspired by a video artwork by British animator Cyriak called Welcome to Kitty City. Amid fierce competition, this source of inspiration manages to be one of the most disturbing things currently available to view on YouTube.

This time last year, Hollywood had the Weinstein Company. Now Wall Street has the “Weinstein clause”. In a new but should-have-been-there-all-along level of wariness about who they do business with, companies – through their merger and acquisition (M&A) advisers – are now seeking guarantees that their acquisition targets can legally vouch for the behaviour of their top executives. In some cases, buyers are even negotiating the right to claw back some of the purchase price if subsequent revelations about sexual misconduct or other inappropriate actions damage the merged company. Bloomberg reports the phenomenon as “a concrete example of how business is trying to adapt to the #MeToo era” in terms of legal liability.

Getting to know: Allan Leighton

Congratulations to Allan Leighton for proving that his gender is no barrier to his career and adding to his extensive CV the position of chairman of London-based AllBright, a networking club for women. Leighton, who chairs the Co-operative Group and is a former chief executive of Asda and Pandora, was chosen for the role by the club’s founders, Debbie Wosskow and Anna Jones, who defended their decision by saying that, for change to happen in the business world, you “need to bring men with you”. It has, nevertheless, been criticised for the symbolic message it sends. Who really wants to join a networking club that’s all a bit Charlie’s Angels, only with more business cards and fewer stunts?

1: Black Panther. Although the Marvel superhero film was released in the previous quarter, its box office receipts continued to shine. Expect sequels.

3: The Incredibles 2. The Pixar movie was no slouch either, helping the group’s studio revenue to 20 per cent year-on-year growth.

4: Paid subscriptions. Disney is warming up to launch a Netflix rival next year, but in the meantime it says its new sports streaming service ESPN Plus has got off to a “strong” start.

5: Higher prices. Disney’s parks and resorts revenue fell short of forecasts, but it was still up 6 per cent year on year thanks to higher average ticket prices and room rates, while merchandise also flew.