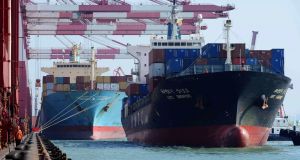 The European Commission has proposed new shipping routes between Ireland and mainland Europe after Brexit.

Proposed new shipping routes from the Republic to Belgium and the Netherlands after Brexit would increase transit times more than threefold, meaning Irish food would be spoiled before reaching the continent, hauliers have said.

About 80 per cent of all Irish goods exported to continental Europe go via the Channel Tunnel between England and France. Concerns have already been raised for Irish exports over long delays at the land bridge due to additional customs checks after Brexit.

The European Commission has proposed new shipping routes between Dublin and Cork and Zeebrugge and Antwerp in Belgium, as well as Rotterdam in the Netherlands. This, it said, was to “ensure connectivity” between the Republic and continental Europe.

The proposal makes no mention of major sites in France that are geographically closer to the Republic, such as Roscoff and Cherbourg. This follows serious disruption caused by industrial action by French port workers.

The UK is part of the North Sea-Mediterranean Core Network Corridor (NSM corridor), which links Belfast, Dublin and Cork with Glasgow and Edinburgh in the north of the UK, and Folkestone and Dover in the south.

If transitional arrangements are not established in a withdrawal agreement, the UK will cease to be a member of the NSM corridor from March 30th, which the commission noted will “significantly affect” affect the Republic.

Freight Transport Association Ireland spokesman Jerry Meredith said the proposal “does provide a solution and give us ease of accessibility into mainland Europe”, but noted: “The problem is the duration of the sail.”

“At the moment, the travelling time between Dublin and Zeebrugge is 11.5 hours and that’s using the land bridge,” he said. “Going with those shipping lines would be anything between 36 and 41 hours.

“That in itself would not assist with the likes of fruit products that have a shelf life. It’s going to create a problem. This issue with the land bridge is a major issue for international hauliers. We still need access to France and Spain for our products.”

Conor Mulvihill, a director with Ibec’s Food Drink Ireland, said that Rotterdam and Zeebrugge, though further away, are “more focused goods hubs” than the Atlantic French ports.

“But still, food presents somewhat of a unique situation,” he said. “The vast majority of our European bound dairy and meat (over 90 per cent) goes through the British land bridge.

“To switch all of this would still create headaches for our companies because of the extra time needed.” Mr Mulvihill cited additional costs from shelf-life issues; the requirement to carry greater stock levels; as well as more fuel and labour.

“In a no deal/hard deal Brexit we would have to figure this out because using the current UK land bridge we would not only have customs checks, but food of animal origin would also be faced with veterinary checks,” he said.

“Even if UK stayed in the customs union, we would still have massive delays from veterinary checks – unless they stay in same regulatory regime, and the Chequers paper doesn’t say that.

“Like the new route on the NSM corridor, not only would our short-shelf life product face delays on way out, returning trucks would also be delayed.”

Nothing plain about pub takings revealed in insurance case 04:35
Eason to lay off 150 staff as it prepares for June reopening 04:22
Ryanair almost certain to oppose German government’s bailout of Lufthansa 04:18
HSBC board rethinks overhaul and seeks even deeper cuts 22:17
UCD academics call for virus safety incentives for businesses 20:27

1 HSBC board rethinks overhaul and seeks even deeper cuts
2 Eason to lay off 150 staff as it prepares for June reopening
3 ‘Over 1,000’ pubs have interest in Covid-19 insurance test case
4 Ryanair almost certain to oppose German government’s bailout of Lufthansa
5 A Smigin of language goes a long way for well-travelled Cork woman
6 Fruit and vegetable firm obtains interim court orders against technical manager
7 Ryanair goes to court over conduct of social welfare appeal
8 EU parliament may block fund unless it has grants which do not need to be repaid
9 How Germany changed its mind about Europe
10 Huawei asks Samsung and SK Hynix for chip supplies in face of US isolation
Real news has value SUBSCRIBE