The ECB looks to have ‘lost the plot’ on inflation 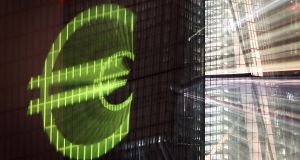 A euro logo is projected onto the main building of the European Central Bank, ECB during a rehearsal of the “Luminale” in Frankfurt. Photograph: Daniel Roland/AFP/Getty Images

Better than expected.” How often have we heard these three words after a policy decision by the European Central Bank? My advice is to stop reading immediately whenever you see them. After all, what the markets expect to happen is entirely in the control of the ECB. The only thing that matters is the policy decision itself: the extent to which it can help achieve a target – in this case an inflation rate of just under 2 per cent. It may have been better than expected. But was it sufficient?

The components of the decision announced last Thursday by Mario Draghi, ECB president, were: cuts in the three official interest rates; an increase in the volume of asset purchases; and more generous terms on targeted longer-term refinancing operations, a liquidity facility for banks pegged to the quantity of loans on their balance sheet.

The deposit rate, at which banks park their reserves at the central bank, is down from -0.3 to -0.4 per cent.

Mr Draghi hinted that we should not expect further cuts in that rate. And that line was the really big news of the day. He did not so much cut the rates as end the rate cuts. This is why the euro first fell – then rose when investors realised this rate cut was not what it seemed.

There is nothing fundamentally wrong with any of the decisions except that the ECB missed a trick.

There are big problems with a flat yield curve. It is a nightmare for the banks because their business consists of turning short-term savings into long-term loans. When long rates are similar to short rates, banks find it hard to make money. They have to find other ways to generate income. Think also about the deeper meaning of a flat yield curve with all interest rates near zero per cent.

Assume you trust Mr Draghi’s commitment to the inflation target. Would you, as a private investor, buy a 10-year corporate bond that yields 0.5 per cent?

If inflation really were to reach 2 per cent within two or three years, you would surely make a loss. The only reason you would want to make a long-term investment at these rates is that you do not believe in the target. Long-term rates are low because people believe the ECB has lost the plot on inflation. I, too, believe this.

Mr Draghi and his colleagues retort that their monetary policy is working. They are right. But not as well as it should.

Monetary policies, like the ECB’s quantitative easing programme, filter into the real economy through various channels. One is the exchange rate. In the past two years, the trade-weighted exchange rate of the euro has fallen by 13 per cent. This has improved euro zone competitiveness. But the gains occurred more than a year ago. In the past year the exchange rate has actually gone up 2 per cent.

The second channel through which the programme worked was through higher bank lending. The QE programme ended the credit crunch in Italy last year. But the marginal benefits of these policies have been diminishing. Piling on a few more purchases will not make a huge difference.

What about the targeted longer-term refinancing operations? The nominal rate charge to banks using this will be zero but they will receive a discount, the size of which depends on how much they lend. For the first time, it will be possible for them to secure ECB money at negative rates – at up to -0.4 per cent. So when they borrow €1,000 today, they repay only €996 in a year’s time.

Will that offset the negative effects of a flat yield curve and the impact of the negative deposit rate on profits? It would if there was ample demand for loans. But there does not seem to be any evidence of that. The ECB’s bank lending survey for the fourth quarter of 2015 reported a sharp drop in participation of banks in the most recent TLTRO auctions. Remember that this policy instrument was once called a bazooka.

What I found mildly encouraging was Mr Draghi’s open-mindedness about a helicopter drop – printing money and distributing it directly to the people. There has also been good news on industrial production in some eurozone countries, notably Italy and Germany.

Maybe the pessimism is overdone, the recovery is stronger than many think and the euro zone will perform “better than expected”. But, since this has not happened in a long time, it would be wise not to base policy on that hope. – Copyright The Financial Times Limited 2016