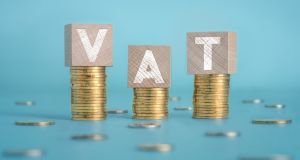 A temporary reduction in the standard VAT rate from 23 per cent to 21 per cent has come into effect. The reduction, which was announced as part of the July stimulus package, will be in place until the end of February.

According to the Department of Finance, the reduced rate will apply to about 50 per cent of economic transactions, and is expected to benefit retailers in particular.

Among the items that the new VAT rate will apply to are clothes, electrical equipment, car fuels, alcohol and tobacco. The cost of the measure to the Exchequer is estimated at €440 million.

The reduction in the standard rate will not impact supplies which already qualify for a reduced 13.5 per cent VAT rate, such as activities in the tourism and hospitality sector.

“This temporary reduction in the standard rate of VAT cuts across a wide range of economic activity, and as such there is a broad range of the types of businesses and traders who will benefit,” said Minister for Finance Paschal Donohoe.

“Discretion in relation to the setting of prices charged will remain that of relevant businesses,” he added.

The temporary VAT reduction mirrors measures introduced in a number of other European countries, including Germany and the UK. It was introduced as part of the €7 billion stimulus package announced in July to aid those affected by the Covid crisis.