Taoiseach warns of ‘major dilemma’ on Border in no-deal Brexit 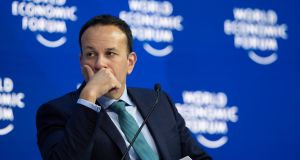 Taoiseach Leo Varadkar said that a no-deal Brexit would trigger a “major dilemma”, which would require Ireland, the UK and EU to sit down “after a period of chaos” and hammer out an agreement to honour commitments that there’d be no hard border between the Republic and the North.

“If we found ourselves in a few weeks’ time in a no-deal scenario, we would face a major dilemma,” Mr Varadkar told reporters at the World Economic Forum (WEF) in Davos.

“Ireland has obligations to protect the single market - it’s our market, our jobs, our standards. Both the UK and Ireland would have a responsibility to honour the Good Friday Agreement and the peace process.

“So, I think we’d end up in a situation where the EU, Ireland and the UK would have to come together in order to honour our commitments to the people of Ireland that there’d be no hard border and agree on full alignment on customers and regulations,” he added.

Mr Varadkar said that a resulting “period of chaos”, the EU and UK would most likely end up with a similar withdrawal agreement that is currently on the table but has been rejected by the UK parliament.

“This is the best deal on offer for Britain and Ireland,” he said.

The Taoiseach reiterated that the Government could not accept a UK withdrawal deal that “doesn’t give us a legal binding working guarantee” on a Northern Ireland backstop.

“But we’ll keep working on this over the next couple of weeks and at the same time prepare for a no-deal scenario, should that arise,” he said.

Meanwhile, European Commission president Jean Claude Junker expressed his full solidarity with Ireland in a phone call with the Taoiseach on Thursday evening, with both agreeing to cooperate closely in the coming weeks, including an intensifying on no-deal contingency action, according to a Government spokesman.

Mr Varadkar refused to be drawn on what Ireland would do if the European Commission told the Government to install a physical boarder in the event of a no-deal Brexit.

The Minister for Foreign Affairs, Simon Coveney, wrote in an op-ed published by The Irish Times on Wednesday the Government is not planning the reintroduction of a border on the island of Ireland “deal or no deal”. He highlighted that the UK had committed in a joint EU-UK report in December 2017 to prevent a hard border by, if necessary, maintaining full alignment with the rules of the European internal market and customers union “that support North-South cooperation, the all-island economy and the protection of the Belfast Agreement.”

“If the UK opts by indecision or choice to crash out of the EU, then that commitment, as well as the UK’s obligations as a co-guarantor of the Belfast Agreement, will remain,” Mr Coveney said.

Meanwhile, Mr Varadkar played down comments on Wednesday from UK prime minister Theresa May’s official spokesman that Downing Street is ready to start bilateral talks with Dublin on how to avoid a hard Border in the event of a no-deal Brexit.

“We’re always happy to discuss matters with our British colleagues,” Mr Varadkar said, adding that he had met with UK chancellor of the exchequer Philip Hammond on Thursday morning in the Swiss Alpine town. “But it should be well understood by now that when it comes to negotiations, they’re conducted between the EU and the UK.

Meanwhile, Mr Varadkar refused to be drawn on questions surrounding his briefing of Opposition leaders on Tuesday night, where the Taoiseach mentioned the prospects of border checks in Calais, in France, and Rotterdam, in the Netherlands, that could affect Irish trade in the even of a no-deal Brexit. Sources have said that the comments were made in passing and did not refer to a concrete plan being proposed by the European Commission.

Dutch prime minister Mark Rutte, who appeared on a Davos panel with the Taoiseach on Thursday morning, told reporters that the backstop preventing a hard border that is central to Mrs May’s withdrawal agreement must remain in place.

“What would then happen when the backstop is gone? A hard border,” Mr Rutte said “And what does a hard board mean? The end of the Good Friday Agreement, back to potentially the troubles we have seen in Ireland. Nobody wants that.”

Mr Varadkar said that Brexit was the main topic as he engaged in a series of meetings with fellow EU leaders on Thursday, including the prime ministers of Poland, Belgium and the Netherlands.