Minister for Finance Paschal Donohoe played down expectations for the October budget in his Summer Economic Statement. Cliff Taylor of the Irish Times looks at the decisions the Minister faces 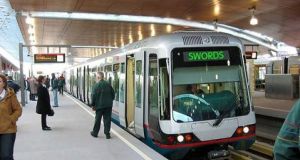 Computer generated image of Metro North. The Government is committed to increasing capital expenditure including roads, schools and transport infrastructure

What does the summer economic statement tell us about Budget 2018 and what it will mean for the economy and, of course, for our pockets?

1. Budget 2018, to be presented in October, will not provide a major boost to anyone’s income and nor will it allow for big increases in overall current spending. The estimate of the room for manoeuvre – the extra cash available for new spending and tax cuts – remains at about €500 million and some €180 million of this could go on the new public pay bill, if it is passed, which would reduce scope to not much more than €300 million

The Government may be playing down expectations a bit and the room for manoeuvre may increase as forecasts are revised in the run-up to Budget 2018, but not by enough to allow for a big “ giveaway”.

However the statement does suggest that the Government will try to make savings from the existing pot of spending, or perhaps raise revenues elsewhere, to allow it to target priority spending projects and reduce taxes on work.

For taxpayers there may thus be some reductions in income tax or the USC, but some of this may be clawed back in areas such as increased excise duties. The problem for the upcoming budget is that the Government is hemmed in by two things. First, the EU budget rules and second the fact that a lot of money for 2018 has already been committed due to carry-over costs from measures already announced and the possible cost of the new public pay deal.

So politically this will be tricky for the Government, as cutting back existing programmes or raising new taxes to make room for more budgetary largesse in other areas could be controversial. However if they do not do this, budget day could be, to use the old cliché, a bit of a damp squib.

2. If current economic growth forecasts are met, they will be a lot more leeway for whoever is in Government from 2019 on. We had already expected more scope from 2019 on, as EU rules will ease , given that we will have met our objective of roughly balancing the budget numbers. However the forecasts of the room for manoeuvre – or fiscal space – in later years has now been increased. The expectation had been that there would be some €2.7 billion in each of the three years 2019 to 2021 for new tax cuts or spending increases.This has now been increased to €3.2 billion in 2019 and €3.4 billion in the subsequent two years.

This is all based on economic growth and tax revenues turning out as expected. And it is notable that while the Government aims to meet the EU target of reducing borrowing to 0.5 per cent of GDP by next year, it has pushed out the time by which the books will be fully balanced from 2019 to 2020.

The statement also highlights the risks on a number of occasions. We saw during the crash how forecasts can quickly go out the window if economic growth turns. This creates an interesting political dynamic. Whoever is in government after 2018 will have to deal with the reality of Brexit but – if that does not lead to a major hit on growth – then that Government could have a lot more leeway. What this means for the timing of the next general election is anyone’s guess.

If this growth is achieved – and it is a big “if” particularly given the Brexit uncertainties – it will give whoever is in government choices to make. The Government has indicated that one of its key choices is to spend more on capital investment in hospitals, roads, schools and transport infrastructure. However it has yet to outline its exact project plans.

In terms of cash, it will spend a bit less putting money into a rainy day fund, to which former minister Michael Noonan had promised to commit €1 billion a year from 2019 on. We are now told that €500 million will go into the fund each year with the remaining spare cash spent on boosting investment.

Also, the State is undertaking a review of the Strategic Investment Fund, run under the NTMA umbrella to invest on behalf of the State. We can expect some of its assets to go into the new investment programme and possibly some to go into starting up the rainy day fund.

There will be some debate on whether the Government is taken a step away from prudence here, but it is hard to judge until there is a full picture on how it will use all the cash under its direction. Also, a key issue will be choosing capital investment programmes that give it a decent economic or social return.