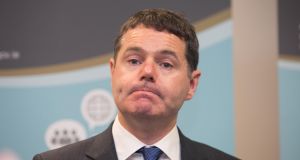 Minister for Finance Paschal Donohoe: said he did not expect tax receipts to surpass expectations this year. Photograph: Gareth Chaney/Collins

The scope for expenditure increases and tax cuts in the next budget will be just €300 million, Minister for Finance Paschal Donohoe has indicated. This would mean little scope for meaningful tax cuts or spending increases – alarming Fine Gael backbenchers and Coalition Ministers alike.

Mr Donohoe said yesterday that he did not expect tax receipts to surpass expectations this year but indicated that recalculation of the budgetary position in the autumn may yield more scope for a budget package.

While the official fiscal space for Budget 2018 is €1.2 billion, some €900 million has effectively been spent on the carryover effects of the previous budget and the new public-sector pay deal, which has still to be ratified by unions.

Speaking after the publication of the Government’s summer economic statement, Mr Donohoe declined to say whether the Coalition’s commitment to a two-to-one split in favour of spending over tax cuts would apply to the remaining €300 million, which could leave just €100 million for tax cuts.

The Government may still seek to fund tax cuts from other areas of current expenditure or by removing the reduced rate of VAT for the hospitality sector, which could generate up to €500 million.

However, Mr Donohoe highlighted the importance of “looking at the totality” of Government spending, which would be in region of €60 billion next year, rather than the “incremental changes” each year. He said the Government would prioritise “limited resources” in those areas where “needs are greatest”.

The Government’s statement, which sets out its future fiscal strategy, confirmed that it now plans to set aside €500 million each year for the State’s new rainy-day fund from 2019 onwards, half the amount that was previously signalled.

Mr Donohoe, however, said the Government’s allocation may be topped up with money from the Ireland Strategic Investment Fund, the operation of which was currently under review.

Former minister for finance Michael Noonan had planned for the Government to set aside €1 billion each year for the rainy-day fund as a buffer against future shocks.

The reduced allocation, however, will allow for an extra €1.5 billion for capital projects over three years from 2019.

The Government’s statement said the shift in focus was required to “further develop our economic and social infrastructure so that we can better meet the needs of our people as our economy, and society, grows”.

Mr Donohoe declined to say which infrastructural projects would be prioritised although the extra investment is expected to go towards addressing some of the current bottlenecks in housing, education and water.

He said the additional money would bring gross capital spending to €7.8 billion in 2021, 85 per cent higher than the €4.2 billion spent last year, albeit he warned the increased investment would be contingent upon the capacity of the economy to absorb additional funding without overheating.

The Government’s statement forecasts 55,000 new jobs next year and economic growth of 4.3 per cent this year and 3.7 per cent next year.

Mr Donohoe noted the Government was still on target to reduce its budget deficit to zero next year down from a post-crash high of 11 per cent.

The Construction Industry Federation criticised Mr Donohoe’s agenda and warned that deferring investment would slow economic growth over the next decade. Director general Tom Parlon said: “If it’s a good idea to invest in 2019 to improve the economy and address the housing issue, lack of broadband and creaking road and rail infrastructure, why not start today?”

Labour leader Brendan Howlin said the economic statement promised little and would deliver even less. And he predicted that the Government would shelve plans for tax cuts as it found money to meet the cost of the new public-sector pay deal under the Lansdowne Road agreement and pay for investment in education and health.

Sinn Féin’s finance spokesman, Pearse Doherty, hit out at Mr Donohoe’s plans for the rainy-day fund. “If you are raising your family in a hotel it is raining today. If you or a loved one are waiting in pain for a medical procedure it is raining today,” he said. “It is beyond belief that the Government would put this kind of money aside when we have such serious crises in our public services.”