Donohoe to slash cash to rainy day fund by half 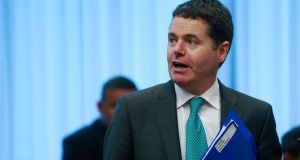 The Government plans to commit €500 million each year to a new rainy day fund from 2019 on, half of the amount which had previously been indicated.

Minister for Finance and Public Expenditure, Paschal Donohoe, said that the change reflected altered economic circumstances and would allow for a significant increase in planned State investment levels.

Speaking on the Sean O’Rourke show on RTÉ this morning, Mr Donohoe confirmed that he would aim to reduce borrowing to meet EU targets next year, which would mean the deficit falling below 0.5 per cent of GDP in 2018. Achieving this target would allow greater flexibility under EU rules from 2019 .

Former Minister for Finance, Michael Noonan, had indicated that the Government would set aside €1 billion per year from 2019 on to a new rainy day fund, to be available if the public finances hit a difficult period in future. Taoiseach Leo Varadkar and Mr Donohoe had indicated that less would go into the fund to allow more funds for capital investment.

Mr Donohoe told Sean O’Rourke that the plan now was to put €500 million less into the fund each year from 2019 to 2021, with the other €500 million thus freed to increase capital investment in areas like schools, hospitals and public transport. He also said that the National Treasury Management Agency and the Irish Strategic Investment Fund were being asked to look at new ways to use their cash reserves to take on risk and boost investment.

The Minister indicated that revised targets for State investment levels had now been set. Previously the Department of Finance had said that €4.5 billion would be spent next year on investment, but this will now rise to over €5 billion. Planned investment levels will also increase in subsequent years. By 2021 the target is that spending will be €7.8 billion per annum, an increase on the existing target of €7.3 billion.

Minister Donohoe said that decisions on where to spend the resulting funds would be outlined in a revised 10-year plan due to be published later this year.

1 What is Covid Tracker Ireland? The HSE’s new app explained
2 British holiday home rental company exits Irish market
3 Will family’s tax debt stop me getting my inheritance?
4 How to save money while helping to save the planet
5 Why gift a son now if it eats into his tax-free inheritance threshold?
6 UK holiday group quits Ireland, ESRI on child poverty, and SME stimulus
7 Mortgage arrears: Prevention is definitely better than cure
8 Pension funds play loser’s game in alternative assets
9 Finance union pushes for post-lockdown rules on home working
10 Can we finally say farewell to the scourge of hot-desking?
Real news has value SUBSCRIBE