‘Not sustainable’ to keep 750,000 outside tax net, institute warns 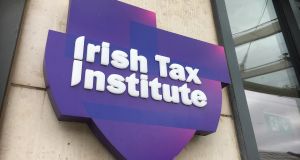 It is “unsustainable” to keep more than 750,000 income earners outside of the tax loop, the Irish Tax Institute (ITI) has warned.

In a pre-budget submission, the institute said that more than a quarter of the State’s 2.7 million income earners were exempt from paying any tax, which left the tax base extremely exposed at a time of growing uncertainty with Brexit and a potential global downturn.

“A system that exempts more than three-quarters of a million out of a total 2.7 million income earners from paying any tax is not sustainable,” he said. “We need a broader base where the load is spread according to the means of taxpayers,” he added.

The ITI said USC, the broadest component of the tax base, has been gradually eroded over the last four years. It accounted for 23 per cent of the income tax take in 2015 but only 18 per cent last year. And the number of taxpayers exempted from paying it has risen from 12 per cent when it was first introduced in 2011 to 28 per cent in 2019.

The institute also confirmed that the Government would generate an additional €600 million in income tax by leaving the headline rates unchanged in next month’s budget. This is because incomes are rising and a higher share of people’s income will be taxed at the higher rate.

The Minister for Finance, Pascal Donohoe, has ruled out any cuts in personal tax in the budget on account of Brexit.

At a meeting of the Budgetary Oversight Committee this week, the chairman of the Irish Fiscal Advisory Council, Séamus Coffey, said this would net the exchequer an extra €600 million while noting the figure was already built into the Government’s €2.8 billion fiscal headroom.

The institute said it supported the Minister’s decision not to reduce personal taxation, while warning the Irish tax system “needs attention” given the level of global risks facing the economy.

The institute also warned that any increase in carbon tax would have an impact on the €3.5 billion in fuel taxes raised by the exchequer each year. “The point is that environmental taxes are aimed, not at revenue generation, but at modifying behaviour,” Mr Mitchell said.

So while raising the carbon tax by €20 per tonne of carbon dioxide may yield €430 million, “if it reduces consumption you will start to affect the €3.5 billion figure in terms of the revenue generation,” he said.

“What’s very difficult to model is whether the behaviour adjusts on the consumer side and people simply consume less or whether it changes on the supplier side and manufacturers come up with new ways to reduce the carbon effect of their product,” he said. There was a balance to be struck, he said.