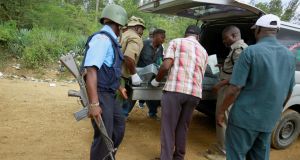 The bodies of an elderly Swiss couple were found dumped by a country road in Kenya’s coastal city of Mombasa with severe injuries on Sunday, police said.

The caretaker of a property where they had been due to stay was being sought for questioning.

Regional police chief Larry Kiyeng identified the couple by name and said they had flown into Kenya on Saturday and had planned to stay at a private residence in Nyali, an upmarket estate in Mombasa.

“They were expected to arrive by midnight but something happened between the airport and the home. We have found some evidence from a saloon car which was parked at the residence,” Kiyeng told Reuters, without giving details.

Police were looking for the residence’s caretaker who had gone to pick the couple from the airport and who has since disappeared, he said.

The couple, who appeared to be between 60 and 70 years old, were found wrapped in a blanket near a local nightclub on the outskirts of Mombasa, area police chief Christopher Rotich said.

“They have severe injuries. One has deep cuts on the head and it seems they were killed using sharp and blunt objects,” Rotich told Reuters by telephone.

In 2014, Russian and German tourists were robbed and murdered in Mombasa in two separate incidents. Police later shot dead two suspects they said had been behind the murders.