The need for new legislation could delay some measures, including credit guarantees 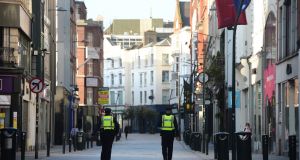 The shutdown has created a cash crisis for many firms and if not addressed it will turn into a solvency crisis and threaten their future. Photograph: Dara Mac Dónaill/The Irish Times

Many businesses will have been taken aback by the long timetable for reopening set out by the Government on Friday. However, the programme of new supports announced on Saturday is significant and tries to address the needs of different types of businesses, many now facing a longer closure period than expected and an unprecedented cash squeeze.

Some of this, including a new credit guarantee scheme and further Revenue forbearance on taxes, requires new legislation and will therefore not be finalised until a new Government is in place.

The cost of Covid-19 in terms of additional Government spending is rising sharply. The latest package commits another €6.5 billion in supports to business. Add another €8 billion already committed through wage and income subsidies and higher health spending, and the total is now between €14 billion and €15 billion, or about 7 per cent of national income. An unprecedented crisis has required an unprecedented support programme.

Some details remain to be outlined, including the cost – which we are told will be below market rates

That said, the final exchequer cost of the latest measures will be much less in the long term; a lot of the warehoused taxes will be repaid, not all credit guarantees will be called in and some investments will generate a return.

Still, it will push State borrowing higher and we will be reliant on the European Central Bank’s presence in the markets to help us raise funds at rock-bottom interest rates. This is a vital part of the economic calculation for Ireland in the months ahead.

The financial supports for business announced on Saturday follow the significant wage subsidy scheme, which is helping cover payroll costs. With ongoing fixed costs, many firms are facing a cash crisis and, if not addressed, it will turn into a solvency crisis and threaten their future.

The new schemes announced attempt to address this. A key part of the plan – a credit guarantee scheme committing more than €2 billion – requires new legislation, and it appears this is not possible until a new government is formed and a new taoiseach puts their nominees into the Seanad. With doubts over whether talk to form a government will succeed, this threatens to leave key parts of the plan hanging in mid-air for a prolonged period. It further ups the pressure to form a new government.Decisions on how to respond to demands for VAT cuts for restaurants and hospitality will also fall to a new government.

The schemes fall into a few different headings. The credit guarantee scheme is a vital element, assisting companies to get access to bank loans. This adds to existing credit supports, which have had slow enough draw-downs. Some details remain to be outlined, including the cost – which we are told will be below market rates. This is an important part of the plan to help SMEs, and banks need to be prepared to lend on the basis of the 80 per cent guarantee. Some tweaks in the rules will help.

The other big ticket item is a €2 billion fund to be run by the Irish Strategic Investment Fund to invest in medium and larger businesses, defined as those with more than €50 million in turnover or more than 250 employees. These are designed to be investments on commercial terms to help bigger firms through the crisis. The Government is conscious, according to Minister for Finance Paschal Donohoe, of controversy in other countries over big business taking state support and then paying out money to shareholders or management. Steps are promised to avoid this happening here. As we know from past history, this is a tricky area for Government and managing this will be challenging and potentially controversial.

The other actions involve an extension of measures already in place, including a significant extension of Revenue forbearance (legislation will also be necessary here) and a sensible move to waive rates for three months for firms which have had to shut.

A €250 million restart fund for micro and small businesses will be launched and designed to give them cash support to help restart, based on a refund and waiver of rates from 2019. This will be essential for many of the smallest firms, though the limit of €10,000 may need to be lifted a bit given the pressure many firms are under and the costs of restarting. In time, more cash may be needed here.

Businesses generally welcomed the proposals, although they will look for quick clarification on detail. Given the extended nature of the reopening announced on Friday, the new measures were even more essential as many firms will remain shut for well beyond the 12 weeks initially envisaged. The Government also faces vital decisions on how to extend wage supports beyond this initial 12-week timeline . The business support programme may be amended or added to, but a significant amount of cash is now committed to try to save business and jobs. The next challenge is to get all this operational and get the restart going.