Looking for a reduction in your property tax? Then tell Dublin City Council 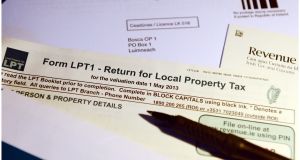 Local authorities across Ireland have discretion to vary property tax by the order of plus or minus 15 per cent. (Photograph: Bryan O’Brien / THE IRISH TIMES)

Looking for a reduction in your local property tax payment next year? Well, if you’re a resident of Dublin city, the council is asking you to give your opinion on whether or not it should cut the tax for the coming year. Doing so could save a homeowner more than €100 based on a property in the €400-€450k price band.

The tax is levied at a rate of 0.18 per cent on the value of a property across the country. However, local authorities have discretion to vary this by the order of plus or minus 15 per cent. Last year for example, residents of Limerick city and county paid 10 per cent above the basic rate, while residents of four Dublin councils (Fingal, South Dublin, Dún Laoghaire-Rathdown and Dublin City) had a 15 per cent drop in their property tax bills. The decision meant that a Dublin resident paid tax at a rate of 0.153 per cent, or just €650 on a property in the € 400,000-€ 450,000 band, instead of € 765. It also meant however, funding foregone for Dublin City Council of €11.9 million for the year.

“Any decision to vary this is very important so we are asking the public for their views. These views will inform whatever decision is taken,” she said.

Residents wishing to participate in the public consultation process can do so hereby August 30th.

1 Corona beer firm reeling after 8% slide due to coronavirus
2 We have little chance of building enough homes to meet election promises
3 Why Irish banks are now looking beyond vulture funds on problem loans
4 Life as a Facebook moderator: ‘People are awful. This is what my job has taught me’
5 Claims of intra-family espionage emerge in billionaire Barclay family feud
6 ‘The only time apartments were viable was in . . . Ballsbridge, Killiney and Dalkey’
7 Pharma giant AbbVie warned Government against ‘unfair’ €572m tax bill
8 Coronavirus: Stocks fall again in worst week since 2008 crisis
9 How well paid do you think you are? Here’s how to work it out
10 Hospitality industry hoping it isn’t afflicted by US coronavirus fears
Real news has value SUBSCRIBE