Slight decline in number of mortgage in arrears

Accounts over 720 days behind are 45% of all in difficulties 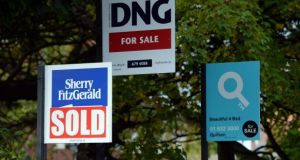 The outstanding balance on accounts in arrears of more than 90 days was €7.9 billion at the end of December.

Some 60,596 residential mortgage accounts were still in arrears at the end of last year with no payments made on 42,000 of these for at least 90 days, new figures show.

The overall number of mortgages in arrears fell by 1,206 or 2 per cent during the fourth quarter of 2019, according to the Central Bank.

Mortgages in arrears over 720 days accounted for 45 per cent of all accounts in difficulties and at €2.4 billion, represented 89 per cent of balances outstanding. The number of accounts in this category decreased by 807 in the final three months of last year.

The latest figures show the number of restructured mortgages totalled 85,315, of which 86 per cent were meeting the terms of their agreements with lenders. During the fourth quarter, 4,993 new restructuring agreements were agreed.

Courts granted an order for repossession or sale of property for 150 accounts in the final three months of 2019 and 102 properties were taken into possession by lenders, up from 80 in the previous three months.

Some 65 properties taken into possession during the quarter had been voluntary surrendered or abandoned.

During the fourth quarter there were 315 mortgage accounts where legal proceedings concluded but arrears remained outstanding.

The Central Bank figures show that as of the end of December there were 13,901 buy-to-let mortgages in arrears of more than 90 days, down 5.7 per cent compared to the prior quarter. The outstanding balance on such accounts was €3.6 billion.

Buy-to-let mortgages with arrears of two years or more fell by 4.6 per cent in the quarter. Such mortgages accounted for 10,365 or 63 per cent of all buy-to-let properties in arrears.