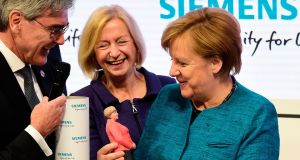 Number of UK-wide bank holidays that Jeremy Corbyn’s Labour party wants to add: St David’s Day, St George’s Day, St Andrew’s Day and something called St Patrick’s Day. This would take the tally to 12, which it says is the average for G20 countries.

Number of official public holidays in the Republic of Ireland, although no one has ever bothered to legislate for Good Friday, so really there’s 10. The last one added was the May bank holiday, first marked in 1994.

Image of the week: Mini-Merkel

What a week Angela Merkel has had. There was, of course, the business of having to keep a straight face and laughing at jokes as appropriate while sharing a platform with “First Daughter” Ivanka Trump. On Monday, the German chancellor also had the dubious pleasure of being gifted with a 3D printed figurine of herself by Siemens chairman Joe Kaeser, as German education and research minister Johanna Wanka looked on, at the Hannover Messe trade fair. Meanwhile, Merkel had to tell Ivanka’s father how EU trade works “11 times” last month, a senior German official has claimed. Look, even the 3D figurine has a better understanding of trade blocs than Donald.

A “quality rater” is what Google calls members of its 10,000-strong global workforce of independent contractors who rate web pages in the name of helping Google’s search algorithm work better. So far, so anodyne. The internet, however, is a murky place. Today, in 2017, “quality raters” are busy flagging Holocaust denial pages to ensure that queries such as “did the Holocaust happen?” don’t bring users into the clutches of anti-Semites with their own fake versions of history. When they’re not doing that, this army of freelances is tasked with sifting through YouTube for hate speech of all varieties, all in the name of making Google’s artificial intelligence better at doing the same thing and ultimately persuading brands that YouTube is a “safe” place to advertise. By rights, “quality raters” should be offered counselling as part of their terms and conditions.

Getting to know: Simon the Rabbit

Rest in peace, Simon, allegedly the latest victim of United Airlines. The 3ft (90cm) continental giant rabbit, aged just 10 months, was travelling from London Heathrow to Chicago’s O’Hare airport when he mysteriously died, never having got to meet his new celebrity owner. Simon still had so much ahead of him: father Darius grew to 4ft 4in (1.32 metres), according to his British breeder. “Something very strange has happened and I want to know what,” Annette Edwards told the Sun. “I’ve sent rabbits all around the world and nothing like this has happened before. The client who bought Simon is very famous. He’s upset.” United Airlines, fresh from having to explain why a passenger was dragged off an overbooked plane, said it was saddened by the enormous rabbit’s death and promised a “review”.

The golden arches have been under sustained pressure, but on Tuesday, the fast food company’s share price reached a record high ahead of supersized earnings that beat analysts’ expectations. So why is it all-smiles at the Happy Meal chain?

2. Coffee: The expansion of its McCafe side-brand has new customers hooked.

3. Cheaper soft drinks: Let its recent price cuts in this area be a lesson to all.

4. Home delivery: Outside Asia, this is still an untapped market for McDonald’s, but it plans to deliver in the US, the UK, France, Germany and Canada soon.

5. Never say never again: Chief executive Steve Easterbrook says the turnaround at McDonald’s is partly thanks to the return of “lapsed customers”.