Irish pharma and medtech at risk from US tax cuts, says Deloitte 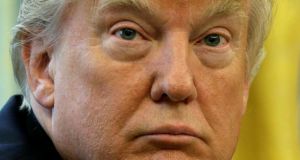 US president Donald Trump has promised to overhaul the US tax code by slashing corporate taxes from 35 per cent to 15 per cent. Photograph: Kevin Lamarque/Reuters

An aggressive cut in US corporation tax could choke off investment in Ireland’s pharma and medtech sectors, consultancy firm Deloitte has warned.

US president Donald Trump has promised to overhaul the US tax code by slashing corporate taxes from 35 per cent to 15 per cent. White House aides indicated that he would even be willing to reduce the rate at the expense of growing the national debt, in a move that could potentially put him on a collision course with Congressional Republicans.

He has also mooted the idea of establishing a border adjustment tax and offering some kind of rate holiday for repatriated earnings. His reform package is expected to be unveiled on Wednesday.

Joan O’Connor, head of international tax at Deloitte Ireland, said a major cut in US corporation tax would make it more favourable for US firms to manufacture at home.

This could potentially dampen investment here as the manufacturing sector is dominated by US pharma and medtech firms. Ms O’Connor said future investment could be “mothballed with a preference given to bringing those jobs back to America”.

She was speaking ahead of an international tax event in Dublin this morning hosted by Deloitte.

Ms O’Connor said Ireland’s IT sector was not under the same threat from US tax reform as firms in the industry ran a lot of auxiliary services which necessitated having multiple locations.

She said there was probably a one in three chance of US proposals for a lower corporate tax rate and the repatriation of profits being advanced this year.

However, she noted that if the window, which runs to October, was missed, the reform agenda could be jettisoned altogether as the US midterm elections were likely to dominate the political calendar in 2018.

The pharma and medtech sectors here were also likely to be worst hit by the border tax proposal, given the large share of Irish exports that go to the US.

However, Tom Maguire, the consultancy’s tax policy partner, said the chance of the Trump administration getting the proposal off the ground was “slim to none” given the likely opposition.

Jon Traub, tax policy expert with Deloitte in the US, suggested Congress may struggle to agree a comprehensive tax package and opt to pass temporary rate cuts instead.

“After the November elections, a lot of folks in DC believed the stars had finally aligned for tax reform, given that Republicans had won the White House and also held on to control of both houses of Congress,” he said.

“ In fact, some said tax reform, along with repealing and replacing the Affordable Care Act and an infrastructure package, all could be accomplished in the first 100 days,” Mr Traub said.

“Those hopes of fast action have been tempered – both by the realisation that Republicans don’t necessarily agree on the details of where tax policy should go, and also by the repeal of Obamacare not passing.

“This makes tax reform harder because the money to achieve a lower tax rate and have a more balanced budget will need to come from somewhere else,” he said.

However, Mr Traub noted that many chief financial officers in North America saw current tax policy as a barrier to growth “and it is the area they’d like lawmakers to tackle first before things like infrastructure and healthcare”.