Devenish boss up for EY World Entrepreneur of the Year award 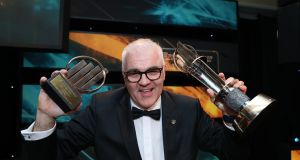 Richard Kennedy of Devenish. Roger Wallace, partner lead for the EY Entrepreneur of the Year programme in Ireland, said Mr Devenish was a ‘world class ambassador’ for the Irish entrepreneurial community. Photograph: Maxwells

Some of the world’s most successful business leaders will be following the EY World Entrepreneur of the Year awards via live stream this year as the formal event, usually held in Monaco, had to be cancelled as a result of lockdown restrictions imposed across the globe.

Entrepreneur Richard Kennedy, chief executive of agri-tech business Devenish, will be among those battling it out at the awards ceremony, having won the Irish equivalent in 2019.

Belfast-based Devenish, which specialises in animal nutrition, operates in more than 40 countries. In the past 20 years it has experienced huge growth, increasing its turnover from £5 million and 23 employees in 1997, to more than £225 million turnover and about 750 employees in 2018.

For the first time ever, the EY World Entrepreneur of the Year ceremony will be held virtually due to Covid-19 restrictions. It will be streamed in partnership with CNBC.

“Each year EY World Entrepreneur Of The Year recognises the highest calibre of entrepreneurs from around the globe who are unstoppable in the pursuit of excellence and who are mould-breaking across a huge number of industries and sectors. As we move towards a wider reopening of societies around the world following Covid-19, the talent and energy of entrepreneurs will be key to reigniting our economies,” said Roger Wallace, partner lead for the EY Entrepreneur of the Year programme in Ireland.

“The EY Entrepreneur of the Year Awards are widely recognised and highly respected throughout the globe and it truly is an honour to be a finalist. This recognition is due to the collective effort of everyone within Devenish to keep striving for excellence and I am always proud to represent that,” Mr Kennedy said.

The event is now in its 20th year. American tech veteran Brad Keywell won the global award last year, for his role in founding Uptake Technologies, a Chicago-headquartered predictive analytics software company. He was previously a co-founder of Groupon.