Russians work long hours but lag behind in productivity 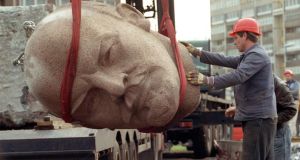 File photo shows a worker removing the head of a statue representing late Soviet leader Vladimir Ilyich Lenin during its demolition on the Leninplatz in Berlin. Photograph: Getty Images

Russians work the second-longest hours in Europe after Greece. It may not be a race worth winning. That’s because in terms of productivity, measured by gross domestic product per hour worked, Russia is behind every country in Europe with 25.9. Greece is almost as bad at 36.2, way below the European Union average of 50, the Organisation for Economic Co-operation and Development estimates.

Like debt, low productivity can ravage an economy. Alongside slumping investment and poor demographics, it’s one of three structural constraints that are leaving the shrinking economy “hobbled,” according to Alfa Bank, Russia’s biggest private lender that estimates the country’s potential growth rate at 0.5 per cent to 1 per cent.

“Russia’s poor growth thus seems to stem more from fundamental factors than economic policy,” Alfa economists Natalia Orlova and Sergei Egiev said in a July 29th research note. While “weak productivity, as well as negative demographics, has been partly substituted for by increasing number of hours worked all over the economy.”

In terms of the number of hours worked, Russia trails Europe’s most indebted nation with 1,982 to 2,034 per person a year, according to the latest data available from the Organisation for Economic Cooperation and Development That may not be much help to the economy. The International Monetary Fund in a staff report issued on August 3rd forecast a “muted” recovery in 2016 from Russia’s first recession since 2009 - a 3.4 per cent slump this year, according to the Washington-based lender.

It put the nation’s medium-term economic growth at 1.5 per cent a year. That compares with 7 per cent average expansion during Vladimir Putin’s first two terms as president in 2000-2008, which coincided with booming oil prices.