Figures from the CSO show prices in Dublin fell 1.9% in January and by 1.4% nationally 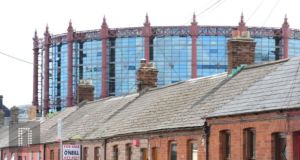 Residential property prices fell at their sharpest rate in three years last month with the decline in Dublin put at just under 2 per cent, according to new figures.

Despite the dramatic declines, property prices remain significantly up on the same period last year, according to data from the Central Statistics Office (CSO).

At a national level, prices of both houses and apartments fell 1.4 per cent last month. This is the largest fall observed in a single month since February 2012.

The decline in the capital was even sharper and prices in Dublin fell by 1.9 per cent in January, the biggest monthly fall in three years.

Dublin house prices fell by 2.1 per cent in January while apartment prices increased by 0.9 per cent.

However, the apartment price increases are based on a low volume of observed transactions and consequently suffer from greater volatility than in other sectors.

At national level residential property prices are now 38.5 per cent lower than their peak level in 2007.

Outside of Dublin residential property prices are 41.9 per cent lower than their highest level in 2007.

1 Moving in and out of lockdown is a recipe for economic disaster
2 Eir customers lose sports content over contractual row with Virgin Media
3 US treasury forced to pay up to fund record stimulus
4 KBC Ireland chief feels heat from big tech in race for relevance
5 General Motors loses rising star after shock move to Stripe
6 Aryzta’s move to replace chairman prompts takeover speculation
7 Divorce: What will it cost and can you afford it?
8 Eight places that will pay you to move there
9 Government to publish broadband contract 10 months after controversial deal
10 Schrems II: there's no way to transfer data to US and comply with EU law
Real news has value SUBSCRIBE